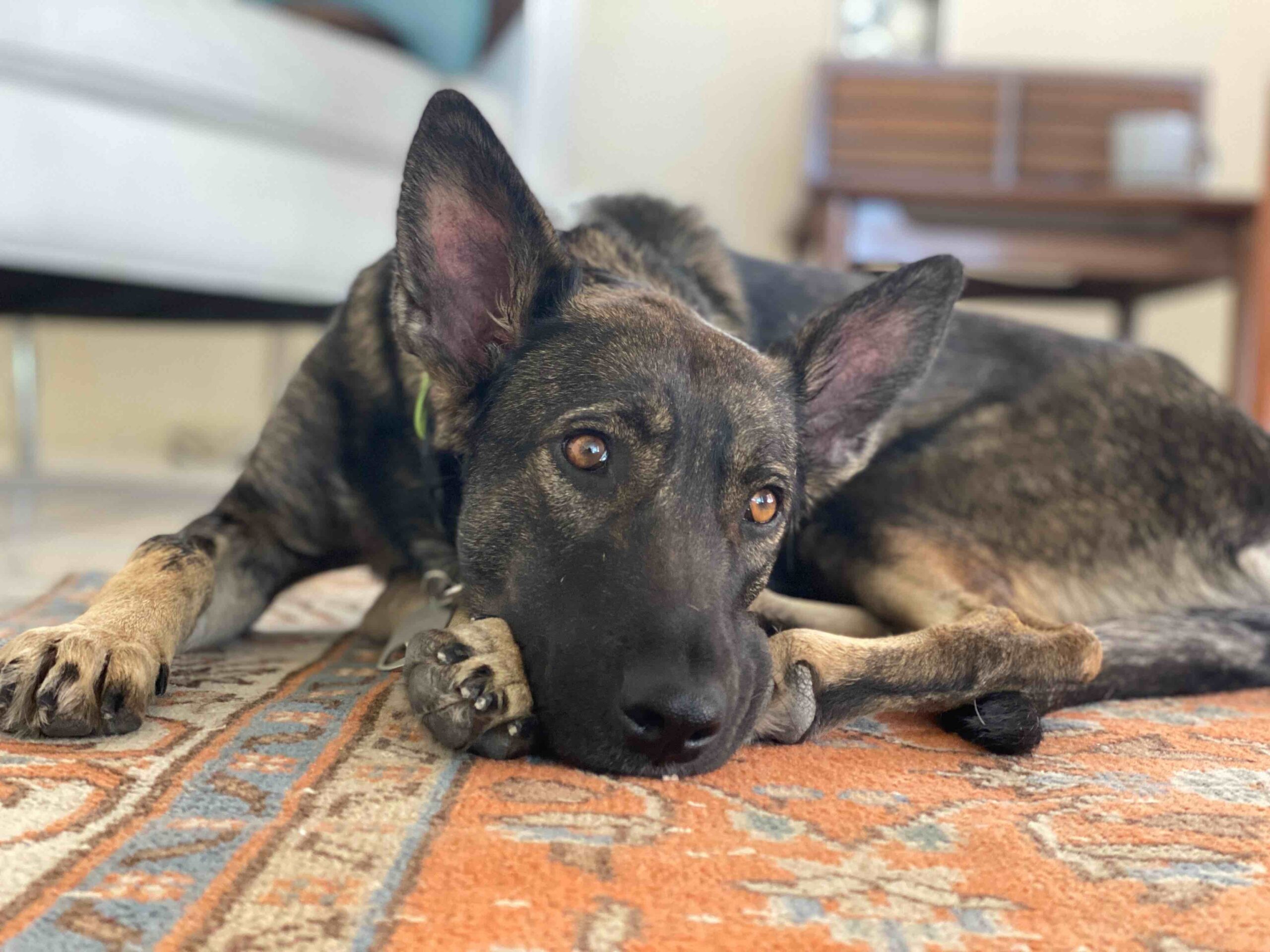 “I am an optimist. It does not seem too much use being anything else.”

It’s been quite a week. On Friday I took the dog we rescued recently to urgent care. We’d run out of the painkillers she’d come to us with, and she was getting progressively worse with each passing day. While at first I was walking her a mile each morning, she could barely make it to the end of the driveway. Although normally cheery in spite of her injuries from two successive car accidents, she barely wanted to get out of bed, and growled at us when we came close to touching her shoulder.

The urgent care vet recommended x-rays and blood tests, and of course, we would have done anything to make our little Tope happy again. A few hours and $1575 later, when I came to pick her up, they escorted me into an exam room and the vet pulled up the scans on her iPad.

On the first scan, she pointed to an area where Tope’s bones looked like Swiss cheese. Then she pulled up another scan, and pointed to other bones, also pockmarked. Then another, and another… I’m not sure when the dread started to set in, but it came in fast and hard.

The doc had only two potential diagnoses, and neither was good.

On Saturday I woke my husband up crying in the middle of the night. I had been googling scans of dogs who’d had bone cancer and dogs who’d had Valley Fever, and I followed each scenario to its possible end. Of course, there is only one certain scenario, sooner or later. But would we have to be the ones to decide? And how much information would suffice to make such a call?

How do we know what actions to take when there is so much around us to triage? Russia is suddenly attacking Ukraine. “Under all emissions scenarios, the IPCC expects a billion more people to be at risk from coastal specific climate hazards in the next few decades.” Inflation is at 7.5% and probably still rising making it even harder for the people to put food on the table. And did I mention my sister found a lump in her breast?

I am reminded of Annie Dillard’s book, For the Time Being, where she wrestles with the brokenness of this world. “You cannot mend the chromosome, quell the earthquake, or stanch the flood,” she writes. “You cannot atone for the dead tyrants’ murders and you alone cannot stop living tyrants.” I cannot stop Putin, lower inflation, or curb global warming. I cannot ensure that the lump in my sister’s chest is benign and I cannot put little Tope back together again.

But you can “work for the redemption of the world,” says Dillard, quoting the theologians. We can be good to one another. I can rub Tope’s belly and give her treats. (Turns out she likes guanciale and parmesan as much as I do.) I can hug my husband. I can call my sister, and invite a neighbor to lunch. I can smile at everyone I meet. Because, why not?

As the Indigo Girls wisely put it, “You gotta tend the earth if you want a rose.”

Is optimism a choice? I almost wrote that, but realized I didn’t believe it. If it were a choice, Anthony Bourdain might still be alive.Maybe our prison system would work toward reform. Maybe Putin wouldn’t be a psychopath. I do believe, however, that if you have the power to choose it, if you actually find yourself on the razor’s edge, debating whether or not there’s any point taking in a Mexican rescue dog, or donating to a homeless shelter, or trying to use less water or electricity, or forgive someone who wronged you… well, if you’re actually facing a choice of whether to be optimistic or not, why not make the one that will lead to a better world?

This is not how I imagined my first post on my newly revitalized blog. Although I’ve been planning it for more than a year, I didn’t think my first words might be something akin to, “We might have to put our dog to sleep. By the way, buy VOO.” But that’s where I’m heading, can you tell?

Because in spite of the fact that her bones are riddled with disease, in spite of the fact that yesterday morning I had to pick up all 35-plus pounds of her lanky German Shepherd-like torso and carry her, awkwardly, halfway down the street because she couldn’t walk another inch… I have this crazy hope that it will be Valley Fever and not cancer, and that we will be able to treat it, and that because of her indomitable spirit, she will live a long, full life.

I’m reading Warren Buffet’s official biography now, Snowball. I’m at the point where he is about to close down all the limited partnerships he’d started. It’s 1969, and he tells his investors that he is “out of step with present conditions.” He’s just finished earning them 58.8% (versus the 7.7% returns from the Dow that year), and he doesn’t feel he can replicate that kind of success. He feels out of good ideas and isn’t hopeful about being able to deliver future returns. So he shuts down the partnerships and pays his investors in Berkshire Hathaway stock, for which he had paid between $7.60-$14.86. Then that was where Buffet put his energy next. In case you don’t follow the market, one single share in Berkshire Hathaway today will set you back $475,879.

“There were no formerly heroic times, and there was no formerly pure generation,” writes Annie Dillard. “There is no one here but us chickens, and so it has always been.” Things are bad. Nuclear weapons are on the table. The species are dying. The methane is leaking. The sky is falling. And so it has ever been.

You want roses? Stop clucking and grab a hoe.

In March of 2020, a few people wrote to me asking about the market. What should they do? I was buying as much as I could with all the money I had. I believed that while things were not looking good, if I considered the long ark of history, we would be okay. And now, as we emerge with all our bruises from the pandemic, we can say that it’s been a bumpy ride for the world community, but for investors, it hasn’t been that painful. In fact, I would argue that the last few years have been good enough that patient investors should be able to stomach a bear market for a bit. Those who are having a hard time should take an antacid and look at a chart from 2008.

I read somewhere that technology historically solves the problems it creates. Our problems are big now, and seemingly unfixable, but I believe we have the technology to solve many of them. And I believe that will be manifested in time in the market. Arguably our biggest hero today is Elon Musk, without whom we would not have the full-scale transition to electric vehicles. Tesla’s stock still has appeal to investors even though it’s trading at more than 100 times earnings. I believe there are other heroes out there, with equally radical innovations just waiting to take off. We have energy technologies we’ve barely deployed – like waste to energy, geothermal, tidal power, energy efficiency software for buildings, and thousands more.

When we were selling our house in Florida last year, my father gave me two pieces of advice. He said, “Be patient.” And: “Don’t be greedy.” Yes, the market is down right now. It sucks. War sucks. Global warming sucks. Inflation sucks. But be patient. And don’t be greedy. Momma said there’d be days like this. And not even Warren Buffet felt like he could always beat the house.

Odds are, this war will end. We will mend diplomatic ties. We will find ways to use less oil, cap the methane leaks, desalinate water and cool the planet. Perhaps not tomorrow, or this year, but in time. As investors, we will put our money in these things, bringing new fuel to the market.

When friends call me and ask if they should be selling funds and stocks, it’s almost always at the bottom of a dip. So I always say no. Not unless they need the money for something and cannot get it any other way. Because most people cannot time the market. In taking their money out of the market at the bottom, they will miss the upswing. They will also miss out on dividends in the meantime – dividends they certainly won’t be getting with their money in a savings account. Could you get lucky? Sure, you might be able to beat it like Buffet. But the odds are not in your favor. The odds favor the patient optimist.

Could you rebalance? Yes. Sometimes you have to cut your losses. If you’re invested heavily in an overvalued stock right now, it was probably the first and hardest to fall. Given that the recovery of a losing stock might be years away (I’m looking at you, PayPal), it may indeed be best to sell at a loss, and move that money into a surer bet.  Like VOO or other S&P fund, or a value or dividend ETF. ESVG if you don’t want guns, oil or tobacco.

Today, Tope is doing okay. She took a short walk this morning and she seems happy enough. We’ll know more about her prognosis at the end of the week. It might be grim. I might be an emotional wreck for a while. Things most certainly will get worse in Ukraine before they get better. We will likely kill another coral reef or two this year. The ticking clock will eventually stop for each and every one of us. But for now, because I can, I choose optimism.

In 2006, I began dipping my toes in the stock market. I made a few good purchases, and a lot of terrible ones. Over the years I began coaching friends for fun. Some friends just wanted to hear my stock picks, while others were looking for ideas on how to structure their retirement savings. During the pandemic, like so many other people, I baked and gardened and reconsidered my two-decade career as a copywriter. As someone who has dreamt about being a writer since girlhood, I did not expect to that I would find helping people with their finances so much more gratifying. There was just one little issue: I lacked a financial education or any proof that I knew about tax strategies or investing. So in September 2020, I began coursework toward CFP certification. It’s been a long transition, but I hope to be certified as an advisor in California in the spring of 2022, as I continue to work toward completing the requirements for the CFP. I cannot charge for financial planning until I am legal, but I love discussing tough questions so don’t hesitate to reach out.