The transit flew by as it always does, as if in a dream. Perhaps even more so this time, because except for the first afternoon, we sailed through an almost constant fog with no wind. It was as though we were sailing to Neverland, or Byzantium. The ship that time forgot.

I awoke that last morning with severe cramps, wishing I had any job at that moment for which I would not have to get up and make breakfast. I think I wished this the last time my monthly came around. Throughout the day I had several more of those moments – just a tug of longing to be elsewhere. At one point that morning Smith said there would be no time for Bananagrams during the next long transit down the St. Lawrence because we’d be having work parties. In other words, the crew will be doing projects for ten hours a day. I had kinda been looking forward to a time with no passengers, where we might sit a while after a meal and play a game or two. (When passengers are with us, they sleep in the bunks flanking the main salon.) This made me want to run my own boat. If it were me, since the crew doesn’t get a day off during transits and work six days a week the rest of the time, I would make transits a kind of downtime. It makes me miss the days in WIlmington when Cap would give us lessons in the mornings.
Later, it happened again, when I was preparing the lamb marinade (Captain Dashing said his favorite meat was lamb) and listening to Madame Butterfly at a fairly high volume (is there any other way to listen to opera?). Smith came to turn it down. I understood; we were at the dock and she said they could hear it in the aft cabin. Still, it made me long for an apartment of my own where I could play the aria as loud as I wished.
What I Learned about Management, I Learned from Ol’ Granddad
Before P1 and P2 left the boat, we had a brief conversation about the dynamics on the boat. P2 reminded me of my father in some ways. Both pilots. Both high-energy guys. Both armchair psychologists. He said something about the empty chairs at meals: we are not allowed to sit in either the captain’s or the mate’s chairs when they are not joining us at the table. This is definitely up there on my list of Stupid Boat Rules. P2 said he guessed it was a sign of respect. I replied that leaving the chair empty didn’t make me respect someone more – it was how they treated people, how they managed a crew.
Before going out to the bar on Friday night, Rigby and I did dishes in the galley and talked more about this. He says you shouldn’t question the captain, no matter what. I said, “But of course you should ask questions. That’s the socratic method. It’s one of the main ways you learn anything in this world!” But then I think the discussion boiled down to this question: is respect earned? I don’t respect Captain Flash because she’s a captain; though that’s impressive. She didn’t have to earn my obedience – I have to listen to her because she’s my boss. But she earned my respect by being a good boss (if there are any Skanska people reading, you can say Great Boss if you want, with all caps!).
In the 90s my grandfather took me and a friend to the Raegan library. Standing out on the patio, were approached by a much younger man who said he’d been the staff photographer at Lockheed when my grandfather was a VP there. “Mr. Hammond,” he said, “You treated me and everyone on our staff with such respect. I will never forget it.” My grandfather was flustered. He didn’t handle flattery well. But I was so proud. My grandmother always had a chip on her shoulder because my grandfather never made general. She was always focused on the wrong thing. My grandfather hadn’t worked at Lockheed for ten years or more.
Check Point
Eve tells how the old cook checked out at a certain point. How he started buying prepared foods. I can tell. I see the cans of chowder and ravioli in the cupboard. Instant mashed potatoes and premixed brownies. What does it take to make you want to check out? Maybe not much.
When I was growing up, my father ran the house in an authoritarian style. We butted heads constantly. I never liked my father much when I was growing up. Not because of the rules, but because of the fact that there was no wiggle room for the rules. I never felt listened to. There’s one story that’s well told in my family about this. My father disliked the fact that we would not come to the dinner table very quickly when called. I was in high school at the time, and we received a big lecture on this. We were to drop whatever we were doing and get our hinies downstairs. So at the next dinner call, I came downstairs in my jeans and a bra and sat down at the table as if this were the most natural thing in the world. My sisters started trembling. My mother let out a half-gasp, half-laugh. I mean, it was sorta funny. But my father was not laughing. He was irate.
Well, Dad and I get along splendidly now. But I can’t remember the last time he scolded me. Possibly back when I was in college? The long and the short of it is that my mother’s a great cook. And I love mealtimes. If it takes me a while to get to dinner, I’ve probably got a good reason for it.
Hey, Ma, I Wanna Go Home
So… where am I going with this? Do I wanna go home? Absolutely. I’m at a low point. A breaking point. If I was relieved tomorrow of the job, I would walk away, sleep for hours on a train, and wake up tomorrow morning on the shores of sunny Lake Onsted, ready for a day of waterskiing. 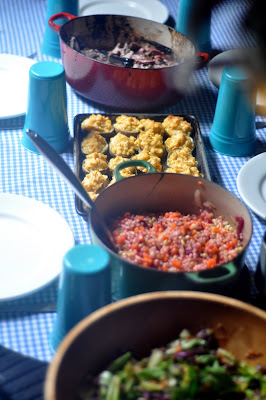 But I won’t. I’ll try to lead by example. Try to address people the way I wish to be addressed. Keep trying to break down the system where I think the system is old-fashioned or broken. Then I’ll turn down the music and play Bananagrams by myself.
Friday’s Menu
Breakfast
Blueberry and pineapple-whole wheat muffins and eggs
Lunch
Sandwiches, plus leftover mac-n-cheese and sweet potatoes
Dinner
Leg of lamb roasted in mint and wine sauce and rolled in cracked pepper. Was a bit strange. Maybe the wine was too fruity.
Twice-baked potatoes
Israeli cous cous with beets and carrots and onions in a mustard vinaigrette
Tossed salad with blue cheese

6 People reacted on this