We left Duluth in the morning, following the Argo out to Superior. Cap said that we wouldn’t benefit from staying in Duluth another day and that it would be better for us to get underway and make headway toward Marquette, where we have a 6:00 PM arrival planned.

All afternoon the crew was involved in projects on deck. Seth #2 explained that “work parties” are an old tradition. I guiltily crept to my bunk and took a long nap. I thought the long, hot days in Duluth were exhausting – and I wasn’t doing any of the sailing. Had I been in command, I probably would’ve stayed in port another day, to rest up.

Off the Chart
We pulled alongside behind the Argo in the small Wisconsin sailing port of Bayview sometime after dinner. This isn’t a stop on our schedule, just a town Cap had been to before and liked. It seems cute and cozy from the dock, but with work parties scheduled for tomorrow, it seems unlikely we’ll get to see much of it. I can hardly keep my eyes open.

Tuesday’s Menu
Breakfast
Leftover bagels, toasted, and scrambled eggs (I woke up tired with 25 minutes to make breakfast); I had the end of a yogurt container with granola and blueberries
Lunch
Phad Thai with shrimp
Thai beef salad (sorta like this: http://allrecipes.com/Recipe/thai-beef-salad/detail.aspx …but minus fish sauce, because I ran out, and including the cucumber and carrot rice vinegar salad from two nights ago).
Pineapple fried rice for Cap. While I was making lunch I realized I would have to make something else for her, since she doesn’t like fish sauce. I got to thinking what avpain it was to cook several meals – one for the crew, one for Eve, and one for Cap. I started thinking I should throw in the towel on the whole gourmet meLs thong. But then, as we sat at the table after lunch, Deutsch said, “That was an awesome meal.” Yeah, I thought, That’s why I do it.
Dinner
Barbecue chicken (using Joy of Cooking’s barbecue sauce recipe, simmering the chicken in it until almost done then finishing them in the oven)
Hush puppies with cocktail sauce and horseradish honey
Pasta salad – a riff on one my mom made when we had our big day off at the lake. I had almost all of the ingredients except smoked Gouda.
Dessert
Caramel corn 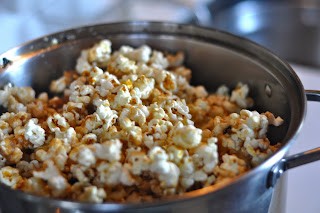