Today was one of those perfect transit days. Good sailing. Cool weather. It’s hard to believe that it can be in the 60s on the boat, when somewhere on land it’s 80 degrees plus. We were heading along at a decent clip, At some point in the mid-afternoon we had swells of up to 5 feet.

I could tell Cap was disappointed again at lunch. I thought hard about what to make: I made pork, because I know she likes it; mashed potatoes, plain and simple; debated about what kind of bread-like thing and landed on corn because she ate the hush puppies a few nights back. But no cigar. She didn’t eat one because it had cheese in it. “What does she think this is a fuckin’ Mexican burrito?” I overheard her say.

Night Watch
After I’d gone to bed, Deutsch saw my light on and called to me through my curtain.
“Come and see the northern lights off the stern,” she said.
I put on a sweater and climbed on deck, but I was too late. Still, the sky was splattered with a thousand stars, and the lights far off on the horizon meant we were getting close to Marquette. 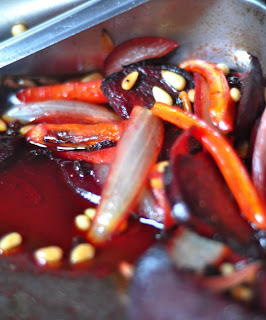