He’s Leaving, but He’s Coming Back…

Today Harrison left. I realize I haven’t given it much build-up. It could be a pretty dour day indeed. But the reason I haven’t given the issue much play is because the lad has been on the fence for weeks about coming back. He was offered the position of bosun when Smith leaves, but he waited until the very last moment to make his decision.

If I were Captain Flash, this would’ve driven me crazy. But then he said yes, and I can only guess she was relieved to have filled the position with a familiar face.

So although Harrison might have left us today for good – he is now returning in Duluth. So neither you, dear reader, nor I, have to miss the guy too much.

Farmer’s Market Mayhem
I heard a woman on the street today call her somewhat unruly dog, “Mayhem!” I laughed. But talk about self-fullfilled prophecies.

But that’s not the kind of mayhem I experienced today. Before my run, Harrison’s folks stopped in. He told me that they would be stopping at the farmer’s market – but I had not expected the boatload of vegetables and fruit that came onboard: 20+ ears of corn; four gorgeous eggplants; red and green bell peppers, Anaheim chilies and another, darker pepper; three bags of new potatoes; eight or more quart bags of blueberries; yellow squash and zucchini. In short, a crazy amount of food.

I have to remake my week’s menu to accommodate this incredible gift – but what a menu we’re about to have!

Then, after my run, Lori, the owner of the Koffee Kove, who had sailed with us down from Ogdensburg, came to the boat with an order of items at cost from her purveyor: flour, eggs, pasta, olive oil. I spent the next hour rearranging. But the kindness of such gestures…

It’s hard not to get sentimental. To not feel overwhelmed when people are so generous. When Harrison’s mom says that he wasn’t getting enough to eat before I arrived, but that after I came she never heard a complaint. Then she gave me a copy of The Enchanted Broccoli Forrest to keep on the boat, because she’d read my entry about it ages ago, and was inspired. 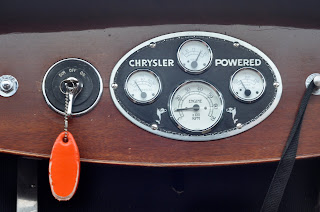 Boats, boats and more boats
Last night at muster, Captain Dashing said that the Antique Boat Museum had offered us the chance to take their boats out. I almost got teary-eyed. I’ve been DYING to go sailing. Eve saw me, and her eyes lit up too. But Cap said that unfortunately, no, there were no sailboats.

I was rather bummed. Until they took us out in these lovely old boats, and our guide, David, told us about the communities surrounding Clayton. It was a beautiful ride and reminded me a lot of Sweden – rock formations leading down into the water, long steps criss-crossing down from houses high above. Fir and pine trees. It was out of a postcard.

After touring the rest of the museum, I came back to the boat, made myself a martini with hot chili peppers in it, and sat on the deck with Smith and Eve, perusing The Enchanted Broccoli Forrest.

“This was a great day off, wasn’t it?” Smith asked.

Eve and I nodded in agreement.

Tuesday’s Menu
Breakfast
Leftover banana bread from yesterday, with chocolate chips in it
Lunch
A BLT at the Koffee Kove (after a massage at the Wellness Center)
Dinner
Fettuccine and meatballs