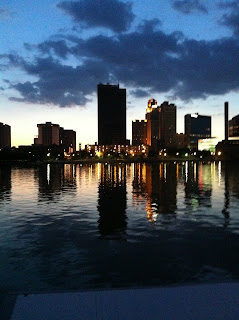 If it looks like Toledo was on fire last night, that’s because it was. Deutsch said she recorded a temperature of 97 degrees during her evening watch – that’s after sunset.

That morning we got an early start, Buttons, Neb, Smith, Eve and I, and headed for my folks’ lake house in southern Michigan. it was a wise choice. Just being on the water all day, being able to jump in whenever we felt like it, made the heat bearable. Though even the water was over 80 degrees!

First Neb learned how to waterski, Dad showed off his wake-boarding skills, and I failed miserably at showing off my slaloming abilities. We drank a cooler-full of MGDs. Mom made us lunch, which included homemade relish on sandwiches and a delicious pasta salad with chipotle and smoked gouda. Then we headed back out to the water and the whole gang clowned around and got their aggressions trying to oust each other while going 25 miles an hour on plastic inner tubes.

It was relaxing. It was just like I was afraid it would be – like a siren song, luring us away from the Marlin. But we did go back. After Mom made us a taco dinner with lime-flavored rice (!), we jumped back in the van and Mom and Dad drove a car of sleeping sailors (and one cook) back to Toledo.

Then it was time to get a good night’s sleep before our next transit – a seven to ten day journey up the Detroit River, along Lake Huron and then across Lake Superior to Duluth, MN.