A Coquet with Croquettes

Posted on: June 19, 2011 Posted by: Cole Ruth Comments: 0
It’s amazing how fast the days fly by. How this morning seems like forever ago. What did I do?
I feel like something interesting happened but now all I can remember is making croquettes. It did take a while…and I did get two marriage proposals as a result – one from Neb and one from Buttons!
They were perhaps the yummiest thing I’ve made in some time. Here’s how I did it: 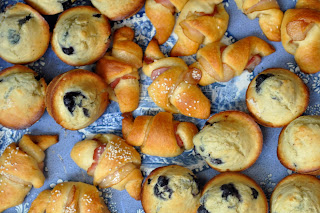 I had bought crab meat from Larry’s truck yesterday that I didn’t end up using in the paella. At first I thought I’d wake up early and make crab cakes for breakfast with poached eggs on English muffins with Hollandaise… I keep planning to make Hollandaise… but my luck with it is about 50/50, so I haven’t really surmounted the first hurdle, which is fear of failure.
But croquettes, you ask? I dove right in.
I found a recipe online that I used as a guide, but I didn’t have a lot of the ingredients, so I did it my own way.
I boiled four-five large potatoes in salt water. Then I mashed them, adding about six tablespoons of butter. I didn’t have any cream, so I used my ever-reliable cream substitute: mayonnaise. About 1/8 to 1/4 of a cup. Mash, mash, mash.
While the potatoes were boiling I thinly sliced and then chopped a large Vidalia onion and a handful of mini-carrots that one of our guests had left behind. These I sauteed in very little olive oil until the onions were translucent and the carrots just barely soft. I didn’t think they were quite sweet enough (probably because those appetizer carrots are always old), so I added about a teaspoon of honey. I didn’t like the smell that came from the skillet then, so I added some salt, pepper, nutmeg and white pepper and it took away that syrupy-sweet smell. Then I added that mixture to the potatoes. Mash, mash, mash.
Then I added about a 1/2 cup chopped cheddar cheese that was from that snack platter. And 8 ounces of cooked jumbo lump crab meat. Mash, mash, mash.
On the counter I laid out three bowls: one with flour; one with two eggs and a little water in it; one with panko crumbs.
Then I patted handfuls of the potatoe mixture into balls, covered them in flour, doused them with egg, and coasted them in panko. I deep-fried them in about a half-inch of canola oil, turning to make sure the job was evenly done.
To complement the croquettes, I took small curd cottage cheese and chopped up tomatoes and cucumber slices (both gifts from our guests, too), added salt, pepper, a smidgeon of dried dill and mint.
On the counter I also placed some banana peppers, chipotle mayonnaise, leftover coleslaw, sliced bell peppers, lettuce, and a few other odds and ends.  The crew wrapped everything up in wheat wraps that closely resemble a Swedish flatbread, and promptly devoured them.
The Incident with the Swim Ladder
As a footnote, I was left behind on both sails today, which meant making phad thai for ten in record time. As I helped release the lines so the boat could get underway, a supporting piece of the boat connected to the anchor chain got caught in between the two handles of the swim ladder on the dock, and we ended up totally bending one side of the ladder. I guess Captain Dashing did not quite understand that he was not clearing it, so as the boat moved away, the last glimpse of him I caught was not pretty. But when I met them on their return to the dock, the mood seemed to have lifted. The crew got the boat to bed in a timely manner and the swim ladder seemed salvageable.

I have exciting news about upcoming crew changes, but I’ll wait until it’s official. Here’s a hint: he’s coming back…

Saturday’s Menu
Breakfast
Blueberry muffins
Crescent rolls rolled up with bacon and orange marmalade, with sesame seeds on top
Smoothies with bananas, maple syrup, mixed berries, yoghurt, vanilla, orange juice, and about a tablespoon or so of spinach… with ice to keep them cold.
Lunch
Potato-crab croquettes rolled up in flatbread
Dinner
Phad Thai