A few days ago I received a package from my sister. It contained a drawing and two watercolors from my niece and nephew along with a worn, black notebook. “I thought you might enjoy this old cookbook I found among Grandmother’s things,” said my sister’s note. “Check the bookmarked page.”

My grandmother was a packrat. When we moved her from her house to the assisted living apartment shortly before she died, we spent weeks cleaning it out. The house was filled with glass vases that had been chipped in earthquakes and broken lamps – stuff she considered ‘antique’ but any antique collector would send to the trash. But in amongst the rubbed-banded oatmeal wrappers (which she saved for the jokes on the back) and the years of National Geographic magazines, and piles of old socks and underwear, sometimes we came across interesting timepieces like this. For some reason, my grandmother saved her mother-in-law’s Home Ec homework.

As instructed, I went right to the bookmarked page. It reads, “Senior Dinners given in the fall term of 1904.”

In careful longhand cursive, my great-grandmother had written out whole lessons on fruits and preserving. There is a lengthy section on dietary standards with a one and a half page chart. “A man with light exercise requires 22% protein; 22% fat; 88% carbohydrates; 2980 calories.”

Reading the menu for the dinner she served, I was transported to a table a hundred years back in time. “This dinner was given November 9, 1904, by Mary J. Bray with Flora L. Campbell as waitress and Miss Gilchrist, Mrs. Haner, and Miss Avery as guests.” 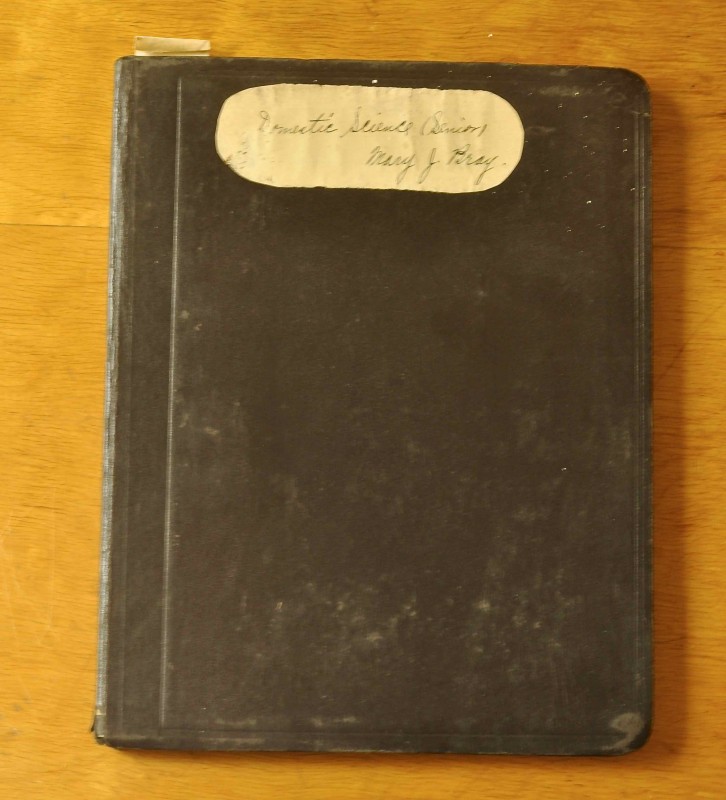 Mostly, this is a book of recipes and following the menu are recipes for Celery Soup, Baked Chicken, Cranberry Sauce, etc.

I can’t explain why I felt so moved holding this notebook that I actually shed a tear. I never knew my great-grandmother. She was born on November 8 (my birthday) in 1886. She died in 1968, before I was born. A quick search on the internet shows that she graduated in 1906 from the Michigan Agricultural College. I know that she married my great-grandfather, Robert Hammond, in 1915. According to the death certificate, two years later, while my grandfather was still an infant, Robert Hammond was “accidentally killed by a passenger train.”

My great-grandmother became a schoolteacher and raised my grandfather on her own. In photos, and from my mother’s memories of her, she was a hard woman. But I’ve always imagined that time hardened her – that anyone would become a little sour on life if they had a husband who, let’s be realistic, probably drove his car onto the tracks while his wife sat at home nursing a baby.

In the pages of her notebook I feel the earnestness – the painstakingly transcribed recipes, written in ink without spelling mistakes or words crossed out. It’s not hard to put myself in the shoes of the young woman who chose to make celery soup and stuffed chicken for three other ladies on the day after she turned 18.

As I get older I find I have this desire to be more connected to history that I have in the past. It’s both a desire to place myself somewhere on the map of time as well as an effort to give my forefathers and mothers some thought, to keep them alive in some way. Looking through this notebook, I felt all of that. I felt the stories, the context, of those who have come before me and I felt connected to it in intimate way – as if the spirit of the young, unsullied Mary J. Bray was alive again for a moment, as if she reached out across a century to place this book in my hands.