Since I arrived in L.A. earlier this month I have been living on my friend’s 34-foot Catalina sailboat. She’s a comfy thing, much roomier than my grandfather’s 27-footer. But life aboard has not been without snafus. Last night I awoke at about 5 a.m. because the carbon monoxide alarm was going off. I still have no clue why. And for the last week I’ve been without electricity.

Having received permission to sail her, I took her out on a day sail last week with a pirate I met during the Buccaneer Days. The sail went well and I even managed to bring her back into the slip unscathed, but in re-attaching the shore power, I overloaded the battery charger. I didn’t realize this until about 24 hours later when the fridge stopped working.

On Sunday the Pirate helped me troubleshoot it and yesterday I replaced the charger and everything is working again, good as new. But there were a few days there where it was touch and go in the galley. When I lost power, I had a fridge full of food – and all of it started to turn very, very fast.

I did like any good sailor: I cooked everything up in one big pot. I took a half-package of chorizo and a half-pack of bacon and sautéed them together. I added celery and onions. I had a can of diced tomatoes and a can of chickpeas and I added those as well. For the last few minutes I threw in some red peppers, salt and several dashes of chipotle tabasco sauce. This is one emergency meal I plan to recreate again someday under normal circumstances.

Eggs my way
Before the battery charger broke, breakfast my main meal. When I was staying with my friends, Beth and Marc, I used up old fennel stocks by chopping them finely, sauteing them with olive oil and then cooking my egg on top. We had leftover sriacha mayo from a local pizza place, so I squirted that around the edges and used the leftover chili flakes on top.

This got me thinking that I could basically cook an egg on anything. So once I moved onto the boat, I sautéed onions and green peppers, added chorizo and a bit of half and half to make it creamy. Then I set the egg in the meat sauce and put the lid on, basically poaching the bottom of the egg in the sauce and steaming the top of it. Now that the fridge is working again, I am thinking up all kinds of new ideas along this theme – Indian-style creamed spinach with egg on top; Brussels sprouts and bacon with an egg on top. 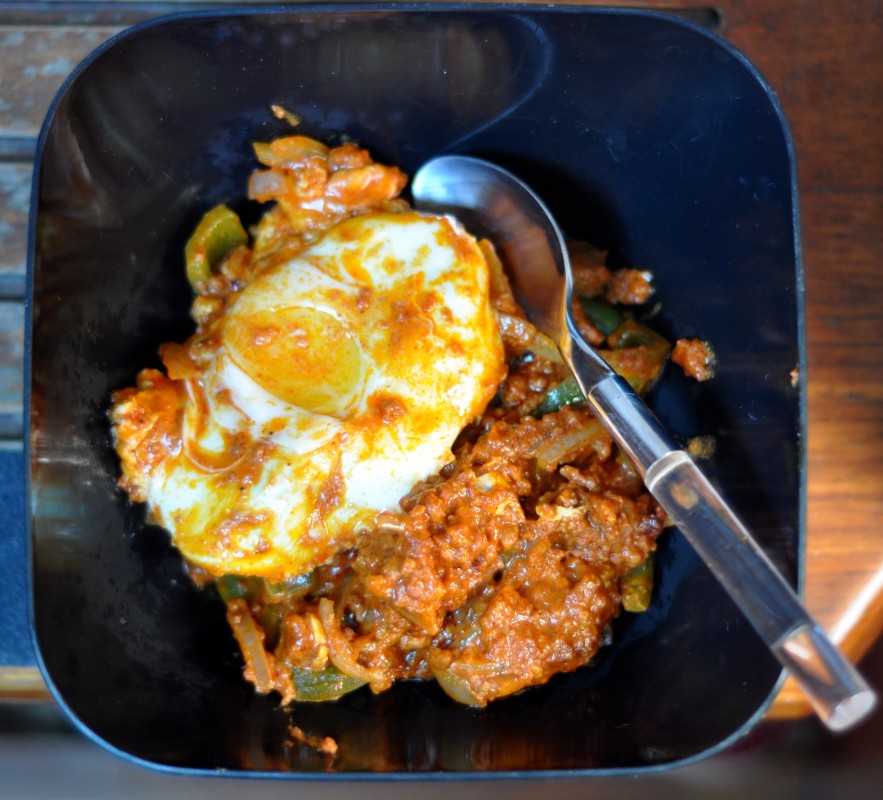