Come On Baby, Come on and Oyster Safari with Me

When the editor at Saveur mentioned I would be going on an oyster safari, I had no clue what she was talking about – but boy was I game. The day after Amy and I landed in Sweden we drove our special edition Volvo two hours up the coast to a tiny fishing village called Grebbestad. It was in such a remote location that the Volvo’s high-tech GPS could only get us so far. Then we had to rely on hand-written directions from our hosts.

Little did we know, but we in for a seafood extravaganza. This quiet place nestled among clusters of rocky islands is Sweden’s seafood capital and ninety percent of Sweden’s oysters come from this village. Not so long ago Everts Sjöbord was a dilapidated house filled to the brim with rusty car parts, old furniture, and knickknacks. When the local eccentric who owned it died, brothers Per and Lars Karlsson saw a way to quit their day jobs and make a life on the sea. They stripped the house down to its bones, fixed the exterior walls (which were falling down) and set up their new business: seafood safaris.

During other seasons, especially September, the main sport at Everts is lobster. But oysters hibernate, and during the winter they are rich in glycogen, which works like an emergency battery pack of glucose. In early spring, when we were there, the waters are still cold, and the oysters are at their peak. The glycogen gives them a strong mineral flavor and makes their flesh taut.

Per started the afternoon off by plucking some oysters for us. Standing on the dock, he took a long pole with a net at the end, much like the kind of tool you would clean a pool with, and scraped it along the sea floor. Voila! A dozen oysters. For a girl like me, it was as though he’d pulled up a fistful of diamonds. 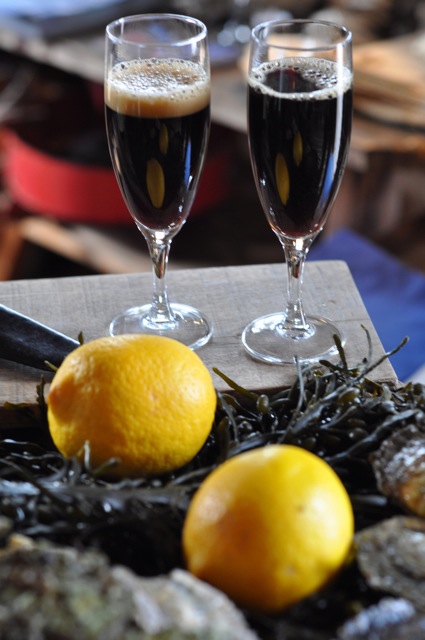 Oyster School
Per showed us how to tell an oyster’s age, like a tree, from the encircling lines on the shell. Then we went inside and he cracked some open for us. As an accompaniment he poured us glasses of Ambassadors Porter, a collaboration with a friend of his at Qvänum Mat & Mal. He took a lemon and showed us how to cut the mineral flavor. “Just a tiny bit!” he warned. “You don’t want to hide the flavor of the oyster!”

After he indulged us (how many did we eat?), the oyster-shucking lesson began. Amy and I both got a chance to practice, and we jumped right in. It was easier than I imagined and more about leverage than strength. Even so, Per had us put on thick plastic gloves for protection.

When the lesson was over, and we had stuffed as many oysters down our gullets as time and decency permitted, Per and Lars took us on a boat trip. We got a view of the town from the water and saw fishing boats coming in with the day’s catch. We watched as one man on the dock wrestled with a huge barrel overflowing with crayfish.

Crayfish Conversion
Coming back from the boat trip, Per led us a creaky narrow staircase to their second floor dining room with its sprawling view over the archipelago. In a matter of minutes he arrived with a three-tiered platter filled with more crustaceans than I have ever seen piled on one plate. 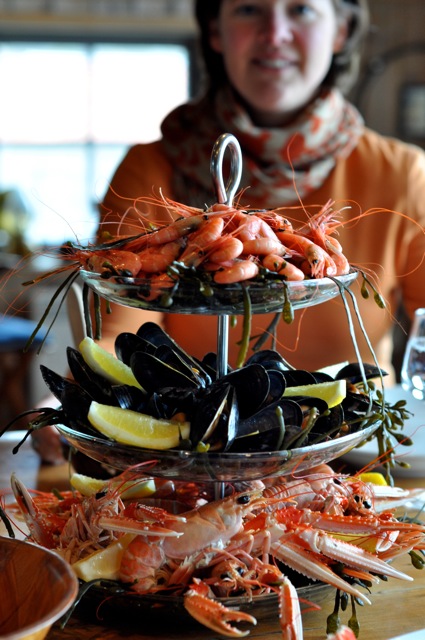 Now, for a moment of confiding. In Sweden, crayfish are nationally beloved. You are as likely to meet a Swede that doesn’t like crayfish as an American that doesn’t like pizza. The first time I visited Sweden in 2000, I attended a crayfish party. I did as I was told: I tore off the head and sucked the juice out of the main cavity. I ripped off one arm and then the other and sucked on the armholes. Then I pulled the meat off at the tail and ate it. Fortunately, I was drunk on schnapps, because I found the entire process revolting and I thought the flesh, steeped in dill, tasted sour.

The crayfish Per and Lars fed us were caught by the fishermen of Grebbestad. They fed us shrimps and mussels harvested a few miles away, served us locally brewed beer, seaweed bread made at a bakery in Grebbestad, and Swedish cheese. It was a meal I will never forget. As Amy said, it was a game-changer: “How can you go back to eating shipped-in seafood when you know it can taste like this? It’s like eating tomatoes in winter!”

At the end of this, our second night in Sweden, my hands stung from where a shell had cut through my flesh and I could still smell crayfish on my hands after multiple washings. I crawled into bed and lay awake a long while, smiling.

WHAT TO TAKE HOME WITH YOU
Swedish crispbread from Grebbestad (http://www.tangknacke.se/). Get the one with seaweed!