I lived in Stockholm for six years and frequently travel back. Although the city always has something new to offer, I’ve compiled a list of some of my favorites. This is also a great itinerary written by my friend, journalist Stephen Whitlock.

– In the old town there’s a place called Le Rouge. Food is solid, but you could have a drink there (downstairs in the basement to see the coolest part) (you have to walk through the restaurant).

– Trannan has the best classic Swedish food: if you go there get the meatballs (to learn that IKEA meatballs really aren’t All That) or my favorite Swedish dish, Beef Rydberg.

– Sturehof and Wasahoff and Pontus by the Sea have the best seafood in town. Last time I was there I really got into Sturehof because I discovered they were open way into the night and they serve these gigantic seafood plates, so it’s just like being in southern France or Maine. Well, the plates are anyway – your pocketbook will feel the difference.

– Djuret (formerly Lejontornet) is a cool place to go in the old town with very good food and if you eat in the bar area it’s less expensive, but you can still go and peak at their 12th century cellar dining room. In 2009 they started the concept of only serving one animal at a time, and apparently it’s a hit. You will need to book ahead!

– Two places to go for drinks with views over the whole city: Gondolen, literally a Gondola in the sky, and a new place on Soder called Och Himlen Dartill – decent drinks by Stockholm standards, and the highest point in the city. It means something like, “And the Sky Attached.”

– When I was in Stockholm from August to October, my big new favorite eating place was Sjograss. It’s been around a while, but they have recently gotten new life. And it’s not too too expensive. Hard to find places that do marrow well… and they do. 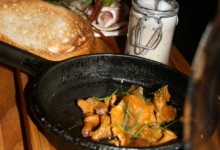 Everyone talks about the Swedes’ love for hotdogs. The best place to experience this is on the main square on Soder, across from the market (Soderhallen). It might be open all the time, but it’s late at night that things there start to happen.

Aside from where to eat, I love to go to Hortorgetshallen. The old town is of course a must. Get a white hot chocolate on the main square at a place called Kaffeekoppen. Food in general in the old town is unremarkable, so careful not to get hungry there unless you go to Djuret or Martin Trotzig, or Rouge or Pontus. One of my favorite places to view Stockholm is from the island of Riddarholmen, which piggybacks on Gamla Stan. The church there with the iron steeple is also one of the coolest in the city. Second best view, I learned this summer, is at the top of the tower at Stadshuset. Not for the faint of heart, but definitely worth it!

There are fun side trips to the scultpure garden at Millesgarden and the famous cemetery called Skogskyrkogården.

Also, some cool things to do, if you don’t go to Gotland: Pay a visit to the home of the king and queen at Drottningholm – and check out the old theater that has never been renovated. It’s pretty cool.

Again, IF YOU DON’T GET TO GOTLAND, it’s pretty important that you get out to one of the islands in the archipelago, if only Sandhamn. You get to see a landscape that’s uniquely Swedish. Tons of boats leave from the main docks. There are overnight trips to islands with guesthouses like Grinda (http://www.grindawardshus.se/) and Uto (http://www.uto-vardshus.se/), but you can also squeeze in day trips if you plan it right. Waxholm makes a great day trip.

A fun, non-touristy day could be spent checking out the auction house at the end of the #1 bus line. http://www.auktionsverket.se/stadsauktion/

It’s tucked away out at the port. One of Stockholm’s best kept secrets is right beside the auction house. It’s a modern art museum called Magasin 3:http://www.magasin3.com/v1/exhibitions/pipilotti.html

You could go around 11 am, eat meatball and beat salad sandwiches at the auction for lunch, then go over to Magasin 3 before heading back to town. Oh! If you go to Magasin 3, there is a hidden exhibit most people don’t know about by James Turrell. You need to ask to be guided to see it, so make a point to ask.