A few years ago I had a job that gave me two places I could work: at a nondescript office building along the Whitestone Expressway in Queens – or in an office in the Empire State Building. You might think that Manhattan would be the obvious choice for foodies. Not so.

The food scene in Flushing is pretty happening with a lot of good Korean and Chinese places and as many a New Yorker will tell you, there’s a culinary dead zone that covers a large swath of the city between the upper 20s and the lower 50s. I would spend half my lunch break walking just to get down to 27th and get barbecue at Blue Smoke or a dosa at Saravanaas. There is actually a wealth of web sites to guide midtown lunchers to a good meal and I’ve scoured them all. So I was surprised when my friend Allen recommended a place I’d never heard of called Sakagura. Upon looking it up, I immediately found this 2006 New York Times review written by David Chang henchman, Peter Meehan.

Sakagura is hard to find, squirreled away at the bottom of the basement steps, beside the elevator bank, in the back of an office building lobby. There is minimal signage marking the way and in fact I might not have found it had the doorman not been directing two German men that had come in just ahead of me. 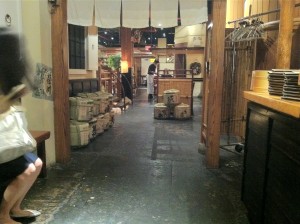 Upon entering, I was immediately struck by how hard they had worked to disguise the basement. The interior has arbors and mock roofs suspended from the ceiling and hung over the booths, making it feel like you just might be sitting inside a Japanese tea house. “It’s like Disneyland,” said Allen.

As I was on a business lunch, I went easy on the sake and stuck with special – a sashimi and soba noodle combo. Our server spoke very little English, but made sure to tell us that the chef only makes 30 of these each day. Clearly, that was what we should order.

The special today was a bowl with little bits of fresh eel, salmon, tuna and egg mingled with sushi rice and another bowl of soba noodles with sauce for seasoning. I should say that I’m not an expert on Japanese food. For expert insight, see Meehan’s review. But I can say that we had fun, the food was tasty, and it certainly beats commuting to Queens.

It got pretty busy, so I recommend getting there on the early side or calling to get a reservation.