Two days ago I rode for several hours in a car with someone I barely knew. He was an attentive listener and asked a lot of questions and by the time we arrived at my apartment, I realized I had disclosed more about me that I usually would have to a stranger, and that I’d told a lot of my main stories. Almost the whole collection. Except this one. In fact, I’m not sure I’ve ever written it down. 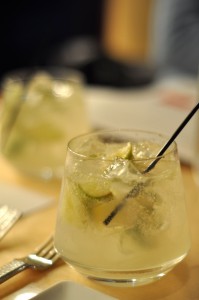 Dollar signs
When I got off the Marlin in the fall of 2011, I shared a ride from Petoskey to Traverse City with Captain Smiley. The driver dropped me at my hotel, the same Holiday Inn that Tami and I checked into two nights ago. Although the website boasts that the architect, a disciple of Frank Lloyd Wright, built this hotel so that every room had a view, I got the one room that didn’t. My view was of the roof of the valet parking. I walked over to the window, to see if maybe I could see the lake from there. What I saw instead was what looked like a wad of bills laying on the rooftop.

Never one to pass by even a potentially lucky penny on the street, I opened the window to see if I could get to it. The window had a kind of lock preventing it from opening too far. I went through my luggage. My chef’s kit. I tried tweezers. Nothing would budge the screw on the lock mechanism. Defeated, I left my room and headed out for dinner.

I walked up and down the main street and decided that Red Ginger looked like my kind of place: asian fusion with an appealing cocktail menu and a Happy Hour special that let you sample a number of their main dishes as small plates. I walked in and took a seat at the bar. It wasn’t long before the man beside me started up a conversation. Somehow I mentioned that I had just gotten off a boat. It was all I could think about at the time, I was free after six months of cooking three meals a day. I was free to go and to do whatever I wanted. It was a strange sensation.

I would learn after that evening that the boat story would always be a conversation starter, a curiosity to engage even people with no interest in boats or sailing or the ocean.

This man had been a sailor for a while, he told me, but he had to stop because of his wife’s health. Then he told me about his life, how he’d come from nothing but was soon flying out  for a meeting to handle a merger that involved one of the companies he owned in the oil and gas sector. Then he told me that he owned an advertising agency. That he supported artists. That he had a school in Haiti. And an interest in a golf course in Traverse City. He told me that he enjoyed starting businesses and helping people achieve their goals. At the time, I wasn’t sure what I was going to do next, but I thought it couldn’t hurt to have someone like him in my court. I asked him if, when I was ready, I could run my business plan past him. He said yes. 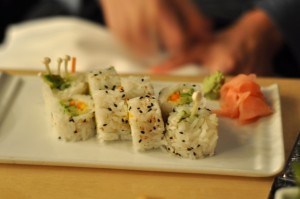 When he left that evening he gave me his email and phone number, and he picked up my check. I turned to the bartender.

I still think about starting a business. As my mother says, I have more ideas for new businesses and new stories than I know what to do with. This is true. But that night, suddenly being free to make a new start, I felt like I had been given a sign. A gentle push from the universe.

I got back to my hotel room to find that the room was stifling hot. I went to close the window and turn on the air and when I looked out onto the roof, there was the money. It had blown right up to the window sill. I reached out, hoping for a windfall. It was a single dollar bill.

The meal
Revisiting the scene of that story was not the only reason I wanted to go to Red Ginger. I remembered the food that night as being very good. Unfortunately, I had forgotten to check the menu and they did not have a lot of vegetarian options for Tami, and even fewer dishes to appeal to a younger audience. 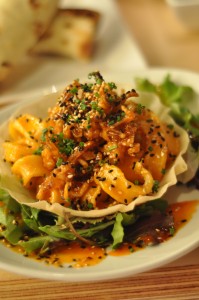 Tami ordered the vegetarian roll with enoki mushrooms tumbling out of it. She also got an order of naan bread, served with hummus. Always one to light up at the mentioning of truffles, I ordered Chef Dan’s signature sushi roll, with shrimp and asparagus. The truffle favor was not super obvious, but the roll was tasty. I also ordered the calamari, which was calling to me because it had a Korean Kochujang vinaigrette on top. (Kochujang sauce is the sweet red pepper puree that is used on bibimbap and that I love to put on everything from brussels sprouts to eggs.) Tami doesn’t eat fish, either, so I was forced to devour the entire plate on my own.

With an eight-year-old in tow, we knew we would be ordering desserts, so we saved room. This is not my usual strategy. But this time it paid off.

There is more on the menu that I would love to have the occasion to try, like their pork ribs and the tuna with “Forbidden rice.” That just gives me one more reason to make another trip up to Traverse City someday.