I made my first batch of red beans and rice when I was on the Marlin. I made it partly because my captain was a picky eater, but liked New Orleans food. I followed Emeril’s recipe to a T and even though Cap insisted that ham hock didn’t belong, she said I could make it any time.

Well, this version doesn’t have ham hocks. In fact, it’s pretty darn far from the real thing, but it turned out great. I chose it as the first meal because it’s easy and can be multiplied for a crowd. It may not be the most gourmet dish I could have chosen, but I think it’s the perfect winter meal. 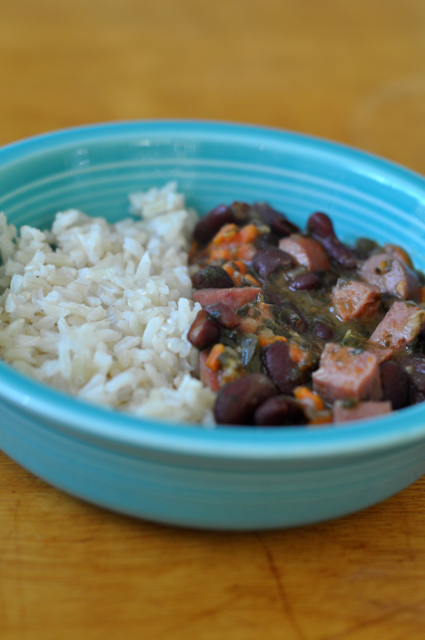 Total estimated cost for this meal: $4.50. Plus, it makes enough that you can eat it again tomorrow.

Rice, cooked per the instructions on the bag

If you have thyme, celery and green bell peppers on hand, I recommend steering as close to Emeril’s recipe as you can. A ham hock won’t set you back that much further either, and real stock over bullion is always desirable.

Otherwise, start by chopping the sausage, then the onions and the carrot and the jalapeno. I like to brown the sausage as much as possible for texture and caramelization, so start by adding that and the oil to the pan. Then add the onion, carrot and garlic. Next add the spices and then the beans. The photo at top shows roughly what the mixture should look like when you add the beans. Then at the stock. The real key in making good rice and beans is not to rush it. There’s a point at which the beans start to break down and the broth becomes thicker. This is the magical moment when you turn off the heat and serve them over rice.