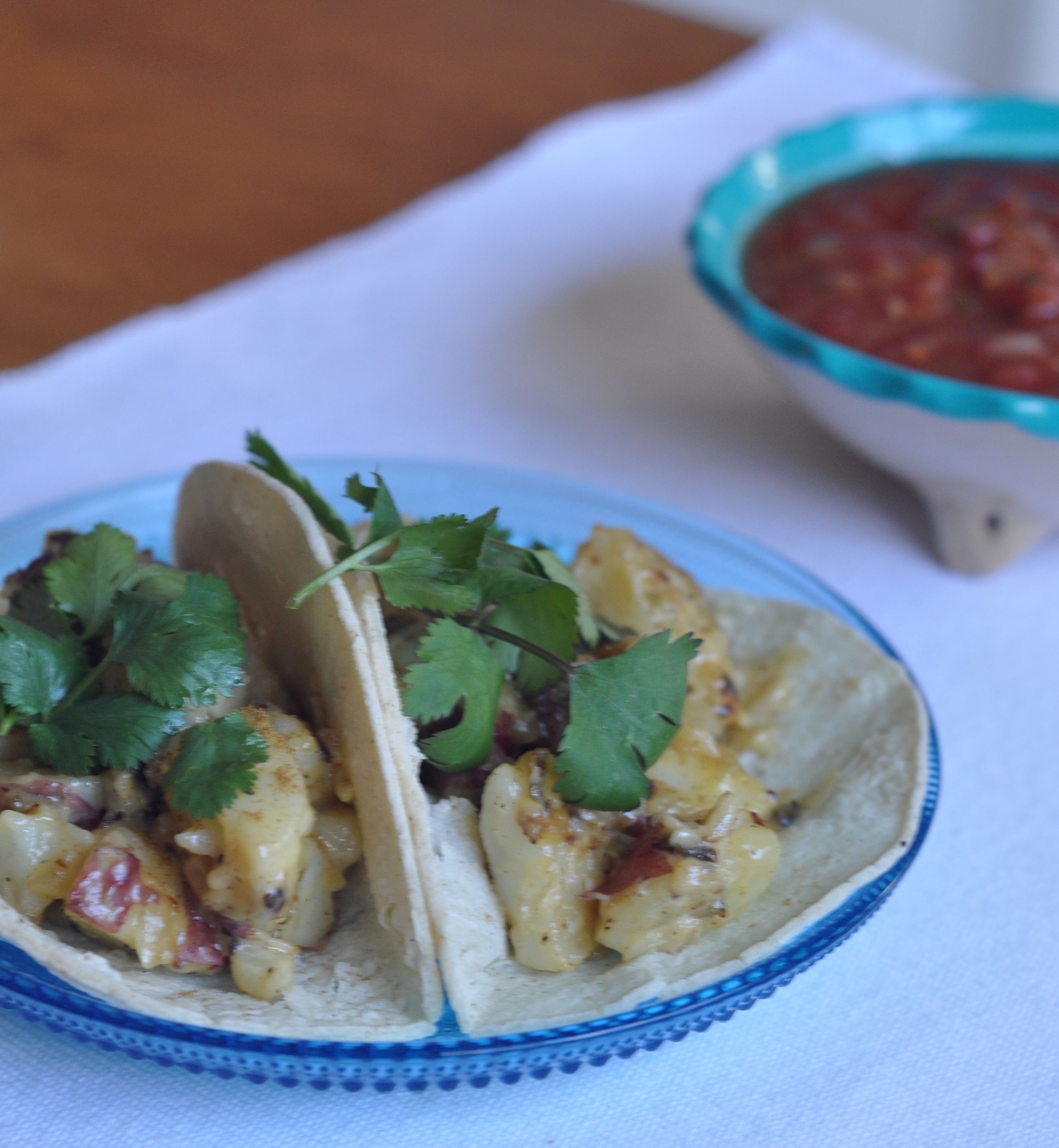 Growing up with three sisters, my mother made a lot of tostada dinners. For some reason we didn’t eat a lot of tacos or corn tortillas, though that is what she now prefers. She would take medium-sized flour tortillas and fry them in oil until crunchy. Then she’d put bowls of assorted toppings in the center of the table: homemade salsa which she canned every year, refried beans, lettuce, cheese and freshly sliced tomatoes and onions. It was one of my favorite meals because we each got to tailor-make our dinner plates.

Realizing this would be a good strategy when I was boat cooking and dealing with too many different likes/dislikes to remember each one, I prepared some variation of them roughly once a week; sometimes with brisket, sometimes ground beef; sometimes pork. I almost always had pickled onions and jalapenos. I made assorted salsas and always, always, grated some sort of cheese.

Alas, there is no cheese in these tacos. I would have put cheese on them had I found it at the .99 Cent Store, but all I could find was sour cream. I was fairly certain I wouldn’t have enough meat to put sausage in them (though if you’re like me, you still have those breakfast sausages in the freezer, and it would not at all be a bad thing to incorporate one in this meal).

So why have I called them cheesy? Thinking about potatoes, I remembered a Swedish dish called Biff Rydberg, which uses an egg yolk to bind the potatoes and the meat and the horseradish together into a cheesy-textured sauce.

Boil red potatoes in salty water to cover until soft (10-12 minutes). Drain and set aside. Saute onions and chile with oil in an iron skillet or frying pan. When the onions turn translucent, remove them from the griddle and toss them with the potatoes. Then put the mixture back on the grill. I still had some grease set aside from broiling the sausages on Sunday, so I laced the griddle with it and dumped the potato-onion-chile mixture on top. Smush the potatoes into the surface. Let them get a nice, hard sear, then flip. When you have what looks like a nice batch of home fries, remove from the heat and place in a bowl. Take the egg yolk and add it to the mixture, stirring quickly to coat. Add a spoonful of sour cream and a dash or two of cumin, to taste.

Place potatoes in warm tortillas, add a sprig or two of cilantro and serve with salsa (though you won’t need it as there’s quite enough going on in these as it is!).