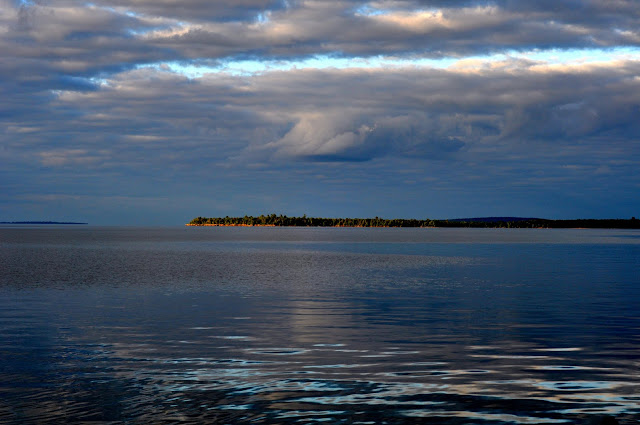 Today I wound the clock. I have to wind the clock about once every week or so. It has rarely been right in my four plus months here. It stays roughly accurate for about 24 hours after being wound, and then reverts to being five minutes slow. It’s amazing how such a small thing can mess with your mind. I actually generally count on it to be five minutes slow – and I use all my minutes, down to the last one, when getting the food out. (I think I’ve always been a right-down-to-the-last-minute-of-the-deadline kind of girl.) So for the first day or so after I wind the clock, I’m inevitably running five minutes behind.
To make matters worse, in the night we switched time zones. This has happened before – my iPhone (which I use as my alarm clock) automatically switches, but boat time stays the same throughout a transit. So my alarm was set for… about an hour too late! With about 40 minutes until breakfast, I heard Smith’s voice on the other side of my curtain. “Cook… I think your clock is wrong.” I sprang out of my bunk and went to work making waffles. But I was so stressed for time that I didn’t wake Eve to start the generator.
It’s kind of amazing, all the little things that make cooking on a boat so much more complicated than cooking on land. If the freezer is running, we can’t run the coffee maker. If the freezer runs all night, we don’t have power to run an appliance at all and if I run an appliance without checking with our diligent engineer, I may ruin the battery bank…. “And then what would future engineers say?” Eve grumbled. When the breakfast call came and Neb said I was making waffles, she knew I was using the waffle iron without the generator… Grumble, grumble. I had a not-so-pleased Eve on my hands for the rest of the morning. I told her to write in her log, “Cook didn’t listen to me again.”
“That’s no excuse!” she grumbled. And of course, she’s right. I just don’t think well when I’m running behind – be it five minutes or twenty.

Shoring up off Sand Island
During breakfast we neared Sand island in the Apostle islands and anchored. We’re still on the hook now, at 11 PM. But no reception. Every once in a while I would look at my phone and some new messages would have come in, but it was sporatic and I never caught it in time to send a message out. (Sorry Mom, about the fennel pizza recipe!)
During the day Neb ran the small boat back and forth to the island so we could stretch our legs. I went on a long walk by myself (even though the mate told us to use the buddy system..). I had to keep a good pace not to get covered in mosquitos, but I took off down a path the others hadn’t taken, breaking cobwebs across the path and scrambling over logs. At the end of the path I found a neglected summer house, possibly now on park property, with a dusty sofa and two chairs in it from the sixties – the kind my friends all want in their houses now. It looked quaint and cozy, and I liked imagining the people who once built it and kept a boat outside, and watched the weather shift across the big expanse of sky and lake and islands. I found my way down to the shore from there, down an old set of wooden steps that had been washed away at the bottom. Then I walked along the beach back to the dock and lay in the sand for a while, sleeping intermittently, enjoying a few moments to myself, away.
The Spoon
After supper I walked back aft to where Captain Flash and Eve were sitting, talking. I had a question from the Nomad that I kept meaning to ask.
“Hey, what’s with the spoon in the foc’s’le?” I had never seen said spoon, but the Nomad had seen it on his boat checks and he’d written me prodding me to ask about it several times.
“You can’t take it down,” said Eve.
“I don’t want to take it down,” I said. “I just want to know why it’s there.”
“It’s a totem,” said Captain Flash.
“”You know how there’s that bent fork in the drawer?” asked Eve. “It’s like that. It’s just a spoon. A flat spoon.”
“Yes, but why is it there?”
“Some things cannot be explained,” said Cap.
I wondered if Cap really knew the story, or if indeed no one remembered why a flattened spoon had been taped to the mast of the foc’s’le. But even if she did know, the meaning would be obscured now to future generations of foc’s’le dwellers and the spoon, just like the origin of the disco balls, and the mouse and the snake, and the button in the galley that says, “Strange behavior? Weird costumes? I must be at work.”
The sunset was spectacular and had the whole crew out on deck, watching. I popped my head up now and then, but I was in the zone, making coconut cupcakes.
Tuesday’s Menu
Breakfast
Waffles (this time I used a recipe from Joy of Cooking instead of the mix, again, to so much better results)
Lunch
Ham and bree sandwiches on wheat buns, with a choice of fig preserves or honeycup honey mustard (a big splurge), plus leftover mac and cheese and a quick and dirty pasta salad
Dinner
Pork tenderloin and country gravy, with a southwestern bean salad and rice
Dessert, for the anchor watchers
Coconut cupcakes (“How do you get these so light and fluffy?” asked Smith. I followed the recipe in Joy of Cooking. Hard to go wrong.)