At some point near dawn, we motored past Eerie, PA, and dropped anchor. Smith and Cap were splitting all three watches between them and were exhausted. Not to mention that the crew had gone from all hands the day before right into watches that night. Although he came on as a passenger, and my guest, the Nomad was put on the worst watch – the one from 12-4 am and 12-4 pm. I hardly saw him. And that night it meant that he got some rest after the Welland, but was up again at midnight, and because of the morning anchoring, didn’t get to sleep until breakfast. I kept telling him to pull his passenger card. Otherwise, he should’ve come along as a volunteer. But, stalwart, he held all his watches like the rest of the crew.

We stayed on the hook all day. It was a sunny, sleepy day. Then, after dinner, we sailed off the hook and into the sunset.

Tuesday’s Menu
Breakfast
Dutch baby
Lunch
A variation on banh mi, without the pate (the meat in the freezer was starting to expire, though I was cooking it as fast as I could), but instead with leftover meats – summer sausage, chicken, and pork; but with the carrot pickles, banh mi sauce, etc.
Dinner
Hamburgers and sweet potato fries 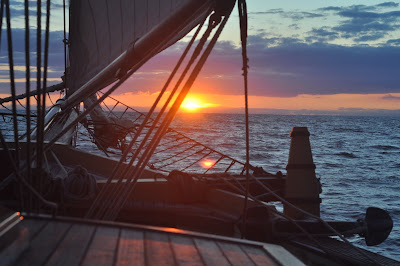