The Nomad and I spent my day off walking the streets of Rochester. We found my Rochester apron at a little vintage store. They had a small selection, but this one was the best, with a Christmasy plaid pattern and holly leaves on it. “I love the pleats,” Eve said when I showed it to her later.

Daytripping in Rochester
We walked around the strangely empty, and abandoned-looking downtown that was once the bustling land of Kodak. We rested for a while on a bench in front of a demolition site. Either the workers had the day off or the work was stalled. It was quiet. I felt like we’d stumbled upon a fresh crime scene. One side of the apartment building was exposed, so you could see the different colored wallpapers and places where fixtures had been. We sat, decoding the missing architecture based on a set of pulleys here, a fusebox there.

Then we found our way to Dinosaur BBQ, and had a tasty lunch with a few flights of beer. Our friendly server even gave us samples of some we hadn’t ordered. 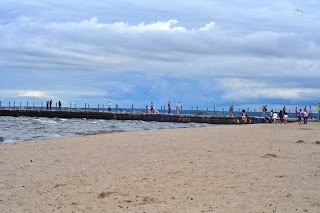 On the bus back to The Beach, as the locals called it, I looked around at our fellow passengers and felt a bit sad for the state of things in Rochester. All the poverty and obesity. The people on the bus looked downtrodden and tired. Many of them were on their way to the carnival that the Marlin was docked beside. Maybe that’s what they needed – a few rides to give them butterflies in their stomachs , a little cotton candy, a corndog.

The Nomad and I walked to the beach. We watched the Marlin come in, and then the Argo. We walked through the neighborhoods, checking out the beach houses with their detached eating areas out by the water. Then we walked back to the boat to get a little rest before our midnight departure.

As is the case on boats, things break, and today it was the freezer. Before leaving I went up to one of the carnival food stands that was closing up and a really nice gal whose mother owned the truck gave me all her leftover ice. “It’s just gonna melt on the way home anyway,” she said. So I packed the cooler with ice, and the freezer with ice, and hoped for the best…

At the Stroke Midnight
Tonight we depart Rochester for Toledo at just past midnight. Captain Flash has a plan to motor us across Lake Ontario in order to get to the Welland Canal in daylight. “It can either take eight hours or twelve,” said Cap. Which means it’s going to be a long day for the crew. Because we’ll need all hands on deck for most of that stretch.