Duluth is a Cool City

It took us seven days to get from Toledo, Ohio, to Duluth, Minnesota. Three days just to cross Lake Superior, which is the second largest freshwater lake in the world. And if I continue with my fast facts, Duluth is also the world’s furthest inland port. So we’ve gone as far as we can go, short of strapping our boat to a trailer and driving it west.

It’s cold here at the end of the lakes. The closer we got to Duluth, the colder it got, though that hasn’t put a damper on the mosquitos. When we headed off to the Sailing Club’s Cheeseburgers in Paradise party last night, I put on five layers – including a wool cardigan and a leather vest lined with sheep’s wool. Thankfully, I did not offload all my cold weather gear at home last week! Eve and I wandered around the marina after the party, looking at all the sailboats. It made me miss the Like Wow, and dream of having a boat of my own.


After a drink with some other sailors at the local brewery, Cap and I headed back to the boat. As we climbed onboard just after midnight, a long low horn sounded, announcing the arrival of yet another ship to this busy port. It was a freighter that has earned the moniker of “Queen of the Lakes,” because at 1013 feet, she’s the longest vessel on the Great Lakes. Cap went crazy. I took the photo on my iPhone. If you look closely at the long line of lights extending from the bridge… Well, those lights are along the length of the boat.


Wednesday’s Menu
Breakfast
juevos rancheros – chili cheese cornbread with rancheros sauce and eggs over easy
Lunch
A fusion mix of pineapple fried rice, Navajo fry bread*, and carnitas cooked in coca cola (I ate mine with mayo and salsa)
Afternoon snack
I used the res of the Navajo fry bread to make mini ‘donuts’ with cinnamon sugar
Dinner
Hamburgers, with a mushroom burger for Eve, and fries 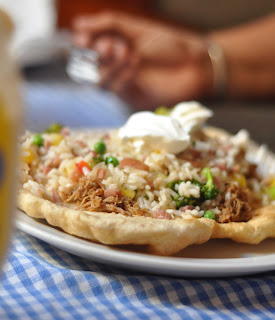 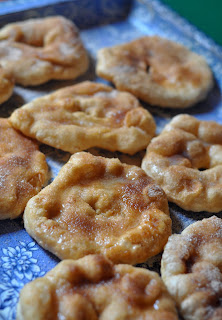 For some reason, everyone loves fried food. I make it pretty rarely – though more lately – but it’s always a hit. This was an easy and delicious substitute for bread or tortillas. Though the frying did take time, it was much less labor intensive than tortillas and doesn’t require the extra rising time that bread does. Like a lot of my favorite recipes lately, it comes from my “More with Less” cookbook.

Knead with hands. Pat or roll into circles approximately 5 inch in diameter. With fingers make a small hole in the center. Fry in several inches of hot oil at 400 degrees, an electric skillet is very convenient for this. Dough will puff and bubble. Turn when golden brown. Drain on absorbent paper and serve hot with honey or for Navajo Tacos. (Or some fusion taco thing, like I did!) 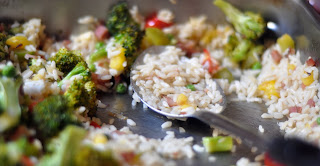