It was cold when we got up this morning in Roswell. A medium-sized crack in our windshield, which was previously just an annoyance to avoid when taking photos, had elongated in the night. It stretched now almost entirely across from the driver’s side to the passenger’s.

My mother warned me that the weather would be unpredictable while driving across the country this time of year. Even north Texas, she said, gets snow. We piled on the layers and blasted the heat.

As we passed Artesia, suddenly there were trees again and the landscape transformed as if we’d crossed an imaginary line. Or a real one, demarcating latitude perhaps.

It wasn’t until we got to Brantley Lake that we ran into the storm. The sky turned from a dull, ugly grey to a soft, dark periwinkle and the landscape became hilly. Weather imitating land.

As in much of the country we’d passed since Santa Fe, the businesses and homes of this place, too, looked forlorn, forgotten.

“Dirt for sale,” Greg remarked. “That’s about all this place has.”

“And raceways,” I added, as we passed the second one in an hour.

“Could use some hope,” Greg added.

As we neared Carlsbad Caverns it started to snow.

We thought ourselves quite clever – going underground on a day like today, going to the only place in miles that was a reliable 58 degrees. We had to make a run for it from the truck to the visitor’s center, the snow bearing down on us in sheets.

The elevator was out, so we had to first brave a half-mile cement path through the scrub. I ran-walked backwards with my hood up to protect my face. I had on gloves and a wool cap. 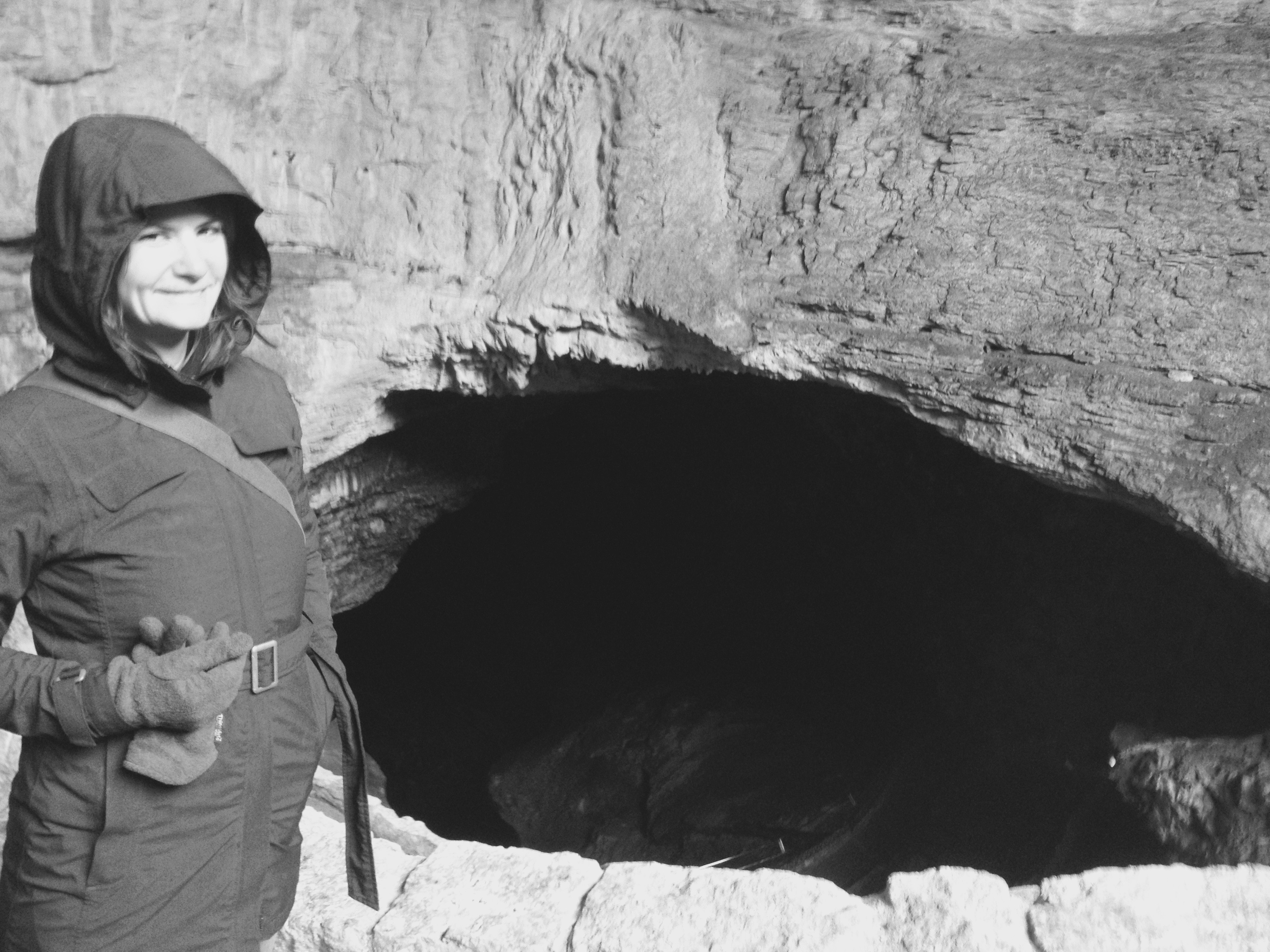 Feet away from the cave entrance, the difference was already remarkable. People were exiting in t-shirts. This was not only due to the difference in temperature, we learned. Exertion was required to hike the incline on the way out. Due to the broken elevator, everyone had to hike another mile in and out again.

Once inside, it felt like we’d been swallowed by a whale. The ceiling above was at first smooth and then craggy with “soda straws” and “curtains” and the path routed us through a maze of lumpish columns and towering stalagmites that stretched upward toward the stalactites. It smelled humid and only mildly of guano (bat shit) and that only near the entrance.

Imagine what it must have been like for Jim White, who in 1898, at age 15 or 16, discovered this cave. What an incredible time he must have had, journeying in and out “at least a hundred times” according to the audio commentary, clambering over the rocks with only a lantern.

As we entered the Great Room (which is so big the brochure claims 6.2 football fields could fit inside it), which is at the base of the entrance, a ranger informed us that, due to weather conditions, the park would be closing early, at 2 p.m.

We sped up our pace and walked around the Great Room and then began the ascent out again.

We watched as people – some of them carrying small children and even babies – continued to enter the cave and we thought, What are they thinking? Surely they would make it only barely to the entrance to the Great Room before they’d have to turn around again.

A warning to potential visitors: find out whether the elevator is working or not. If you have children under six, or if you are older, or have extreme asthma, consider visiting the caverns another time. It is not for the faint of heart or the small-legged.

If everyone in your party is able-bodied and you have time, consider the special tours they offer to the many side caves – some which require slithering on the ground through small openings. Or one which contains hundreds of small pearl-like formations.

We’d seen pictures. And you can see the best of our poor iPhone takes below, but for best viewing, we recommend you make the trip yourself. Greg said it was the most incredible natural wonder he’s ever seen.

When we got back in the truck a thin layer of ice had formed on the rear-view mirrors. The back hatch was frozen stuck and took a second to dislodge.

As we headed toward Texas, we made a last-minute decision to change our route. Though we originally planned to take the 20 across the U.S., the change in the weather and the promise of warmer temperatures and less rain lured us south.

My mother texted: Is it flooding? Only in Pecos, Texas, I told her. There, in the home of the first rodeo, signs boasted “30 eateries” – only one of which appeared open.

“Obama was right,” said Greg as we drove through town after town along the route scattered with churches, religious signage, weather-beaten homes and lots and lots of gun shops. “When times are tough people cling to their bibles and guns.”

The day felt biblical in proportion. We’d driven a long way into the wilderness, were sucked into the belly of a beast, and then forged floods and drove for hours into the night through no man’s land. Perhaps the drive was our ceremony, our ritual: you cannot get to the sunshine state without driving through desolation. Joy, someone said, cannot really be experienced if you have no knowledge of sorrow.

That night we drove as far and as fast as we could.