Posted on: August 28, 2011 Posted by: Cole Ruth Comments: 0
Okay. One last post. Maybe two… I thought you might want to know how I’m handling my new-found freedom. And my mother keeps asking me about the transition, so I thought I’d fill you in. I guess the blog can’t really be over until I’m off the boat, can it?

Today I went shopping with Rebecca, the new cook. I think we have similar philosophies, but very different styles. She’s going to feed them well – and that’s the most important thing. But she bought milk – to bake with, she said. And you know how I feel about milk. And sandwich meat at $8 a pound and Bisquick (which I know you readers know how I feel about since it’s just flour and baking powder and salt and shortening).

This is why I think the handover process should be almost non-existent. Even if you think you can separate yourself from it. Even if you think, like I do, that I’m done and I don’t care anymore – you still do. I wanted to say, “But why are you buying those when you could buy a whole ham at $4 a pound?” But I didn’t. I bit my tongue. And when she bought pre-shreaded and pre-sliced cheeses, I just smiled.

Freedom Now
As soon as we were done I headed off to the beach. I sprawled out in the grass and read The Long Way, a book written by Bernard Moitessier (I’ve mentioned him in previous posts) when he sailed around the world once and a half. I didn’t leave that lawn for hours. I ate a sandwich I had packed for myself – the last leftover medallion of beef tenderloin from our 5-course meal on a homemade bun with mayonnaise and a pickled egg. 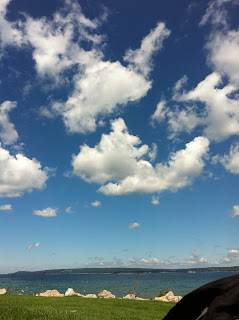 My mother called. She said she loved that she could now call me anytime, and not have to worry about one of the Stupid Boat Rules, which is no talking on phones belowdecks. I told her how the new cook bought Bisquick, and my mother said, “You’ve learned so much!” Given yesterday’s post, which I hadn’t yet put up, her comment was amazingly apt.

Then she wanted to start making plans for their spring vacation. “Where are you going to be? Do you know what you’re going to do next?”

It’s funny, I’ve often heard that freedom is overrated. Who are those people? They have never been cooped up on a boat for six months. Freedom… I will never take it for granted again.

When I got back to the boat late tonight, I pulled out the last of my martini fixings. But when I went to the freezer to get an ice cube… the little tray I’d always kept stashed there was gone. I drank my martini warm and thought, I gotta get outa here.