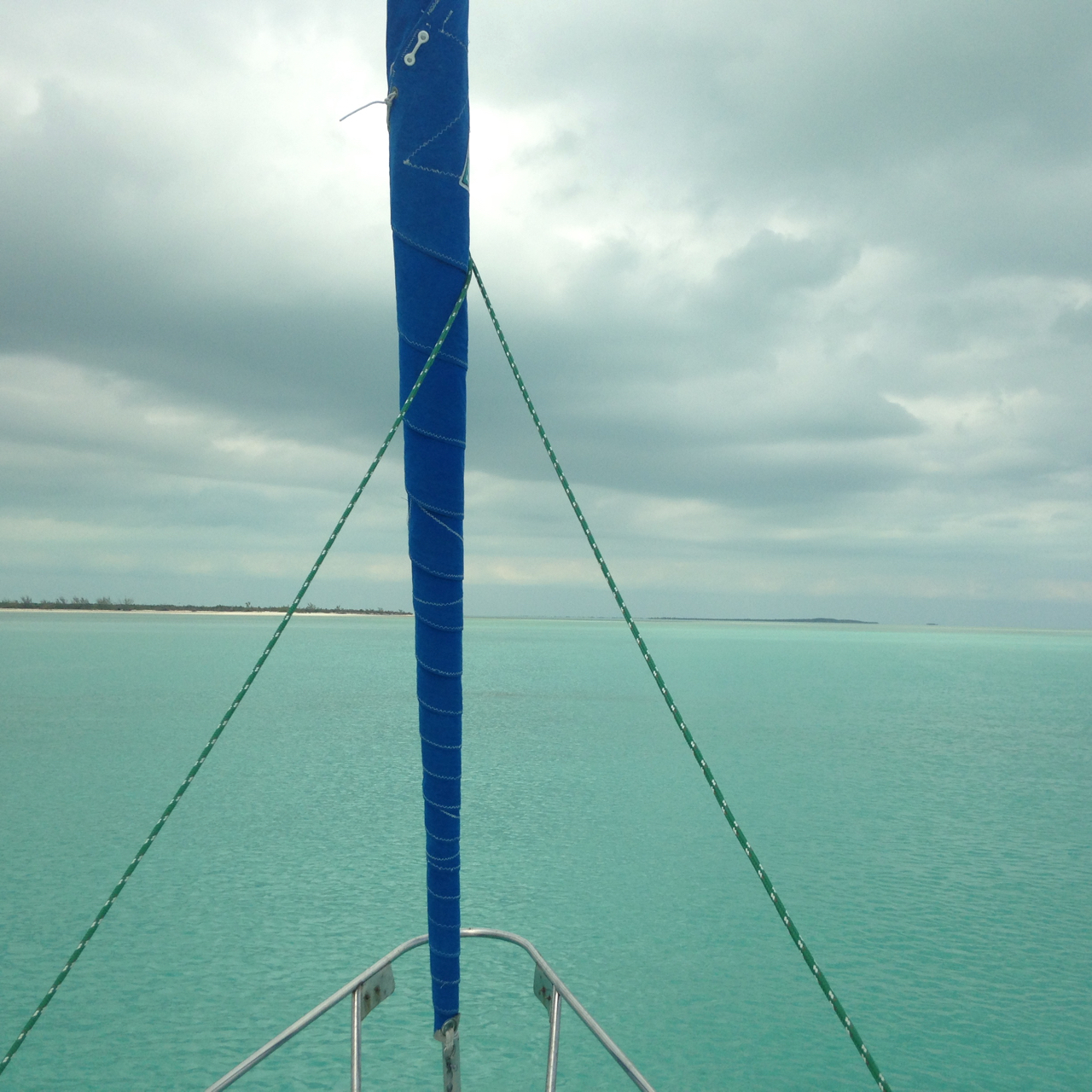 After I flew back to the mainland to have my computer looked at, we stayed several weeks out in the Abacos. Greg’s mom flew in for one week and rented a house in Hope Town. Vince secured a job at a local charter company and we waited another week in limbo to see if there might be enough work for Greg, but it didn’t pan out. Around that same time I was in negotiations to take on a new and massive project that would require me to work around the clock for the next six weeks. We decided it was time to head back to Florida.

We got back on March 13th. It was a grueling return. A storm system was projected for the 14th, and since New York was getting hammered with snow, the weather gurus anticipated that yet another would follow on its heels. If we didn’t make it back ASAP we would be left on the West End of the Bahamas for 2-3 weeks. Word on the street was that the only marina on the West End was without internet, or had been a week prior. On the 10th I got the assignment, so getting stuck without internet on the West End was a risk I couldn’t take.

On March 7th we made it around The Whale, which is a point in the Abacos island chain where any vessel that draws more than three feet must exit the inner waters through a relatively narrow opening, and then return through an equally narrow opening. When winds are from the wrong direction these passages are treacherous, so we had been stuck waiting for a week in Treasure Cay, where a caravan of Dream Charter boats piled high with college kids on Spring Break had decided to hang out and torture us old folks with their late-night drunken dinghy  rides. Under better conditions I might not have minded since Treasure Cay’s beach is reputedly one of the best in the world… but not when it’s blowing 30-40 knots!

We knew we had to hurry to make our weather window to get back across the Gulf Stream but we hated having to rush through this area of the Abacos, which is rumored to have great snorkeling, so we plotted a course after the Whale that allowed for quick stops several days in a row.

En route to Turtle Key we diverted to No Name Cay where Greg had his picture taken with the wild pigs. Then we sailed wing-on-wing (my favorite sail configuration) right up to the harbor entrance and stayed overnight at Black Sound Marina (Greg chose it because he liked the name) where the facilities were minimal but we paid less than anywhere else on our trip. We left around 9 a.m. the next morning and stopped for snorkeling at Nunjack Cay where nurse sharks and rays crowd the shallow waters along the beach because they get fed by tourists. I had hoped we’d beat the crowds but the Dream Charter boats got there first and several other tourist boats came in after us. I suppose that’s the state of wildlife in the year 2017. As predictable and organized as the dolphin routine at Sea World. It made me feel rather jaded.

That night we stayed at Powell Cay, which I enjoyed a lot more. We took a short trail across the island to the eastern side and walked for an hour or so along the beach, collecting empty conch and sea biscuit shells (a kind of inflated sand dollar). A barge had sunk in the harbor and just before sunset we swam to it and checked out the fish, and startled a super-long-tailed ray. Powell Cay is for sale, by the way, if you’re in the market for an island and have seven mil.

The next day after we pulled up anchor we went snorkeling off the northern end and Greg caught a big lobster that I served up for a sushi lunch with these amazing Japanese-style sweet potatoes. Then we sailed on to Allans-Pensacola, a tiny, uninhabited, y-shaped low-lying spit of land near the end of the northern Abacos. It was so quiet. I can’t tell you how much I wanted to dilly-dally. I wish we’d had time to stop at Spanish Cay or go north to even more rarely visited islands.

That day I wrote only one word in my notepad: “lentils”. It took me a minute just now to remember why. We had run out of ice several days prior and were living on lentils and rice. Maybe in July, during my low season, I’ll post some recipes and a series of linked recipes along the lines of “How to eat lentils and rice for three days without it feeling like you’re eating lentils and rice for three days”. I guess it’s easy to romanticize the trip now because here we are, surrounded by water so brown you can’t see down more than a foot – water I would only get in if you paid me and then with the guarantee of an immediate shower. But not everything about it was glamorous.

The next day we sailed with the spinnaker up for the second time. The first time had been on our Gulf Stream crossing, just prior to the squall, and because it kinda jinxed us we looked at it with suspicion, but Greg hauled it out set it up and it dramatically increased our speed in the light winds. We passed a ton of boats that day going in the opposite direction. They gave us the thumb’s up and one even radioed to say how good we looked with the chute up. Greg was on cloud 9. But it was a long day with light and variable winds and we barely made it to Great Sale Cay before dark.

This was yet another island where I read there was good snorkeling, but we just didn’t have time to check it out. We tucked in shortly after dinner and woke up accidentally even earlier than planned because of the time change, and we left before 5 a.m. It started off hopeful enough. For a while we had wind and the moon lit up the water until an incredible sunrise split out over the horizon, with no land in sight.

We stopped at Mangrove Cay for lunch and the wind died. Afraid that it might not pipe up again, we pulled down the sails and motored. And motored. For almost twenty-four hours. I hate motoring. Though for once I was glad we were under power when, as we neared the edge of the Bahamas – yep, you guessed it – we hit a squall. This time we were prepared. Greg veered off-course to avoid the center of it. I went down below and took a little video that shows how calm it was and then how, when the squall hit, we actually heeled over even though we had no sails up. Here are some (we think) rather amusing short clips of the experience. It doesn’t look All That!

The wind was behind us as we crossed the Gulf Stream – what little wind there was – so it blew diesel smoke into the cockpit. It was nauseating. I knew it would be a bit stressful to sail across the Gulf Stream at night. A massive Disney cruise ship passed a quarter mile or so behind us. Other large vessels would appear as pinpricks of light on the horizon and then increase in size, sometimes two or three at a time, and we’d have to watch all of them as they appeared to bear down on us from different directions.

When we entered the Port Lucie Inlet, I pulled up a photo of us from the day we left, several months prior. We looked so excited and happy. Now, exhausted and less-than-happy to be back, I took another shot. (We actually don’t look so bad! Though maybe a bit cold…)

This is the first day since we got back that I woke up without work to do (though I received a few emails as I wrote this), so I decided an update was long overdue. Especially as a recently received an email from someone asking if we were back… We are, and we are actually still living on the boat. We got a slip outside our old apartment and we’re saving up for a house. We’ve decided this is as good a place as any to drop anchor – especially with the islands and the ocean at our door.

If you’ve followed along on our journey, I hope you found it entertaining. If you’re a visual type, you might find this interesting. It’s a map Greg made by exporting our GPS tracking… complete with amusing notations. We had a blast and can’t wait to go out again. Maybe next time to the Exumas, or Cuba. But definitely not without refrigeration.

On that note, I’ll leave you with this link to my sailing playlist on Spotify. It’s how I get through those days when, as Melville’s Ishmael said, I start feeling the need to knock the hats off people’s heads – because everything in me says it’s high time I put out to sea.