Today when I left the hair salon, I thought: these guys get paid $85 an hour to make me feel good about myself. I wish I could do that with my writing – ask people to step inside my writing booth a minute. I could jot them a few lines and then they would leave feeling uplifted, enlightened and hopeful about the world…

Well, okay, that is probably not going to happen. But I love that I can do that with food. Most of the time I’m on the receiving end: like a few nights ago when I heard the fire alarm go off upstairs, and I texted Chef and asked what he was burning this time, and he later dropped  by with cauliflower. Or last night, when I went to have a drink at the bar at Waterloo & City, Chef Lou came out with a new dish: peas, goat yogurt wrapped in thinly sliced chorizo, snap-crackly macadamia nuts and fava beans. So fresh and spring-like, and served hidden under a fresh pita pocket (you have to lift the pita to see the peas). 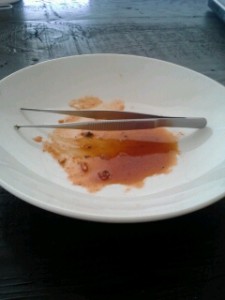 Rice cake happiness
So today, I decided to  share the love. I made lunch for myself and some for Chef, too. Korean rice cakes are the starring role in this dish. I ate them for the first time at Momofuku ages ago, and when I started cooking on boats, I knew a rice cake dish had to be on my list of things to make for the vegetarians. We were in Boston at the time and I looked high and low for a store that would sell them. You can’t ask for “rice cakes,” not in my experience. Nobody knew what the hell I was talking about. Or even “rice sticks”; those are noodles. So if you want to make this dish at home, I suggest taking a photo of these rice cakes with you on your phone to show the people at your Asian (hopefully Korean or pan-Asian) grocery store. I love these things and believe everyone should love them. If I were vegetarian and especially if I were Celiac, these would become a staple in my kitchen.

Take the cakes and soak them overnight. I only soaked mine for two hours, then briefly boiled them. This worked great. You can immediately see the texture change. They go from being rock-hard to pillowy.

As they boiled I cooked bacon on my cast iron griddle and then set it aside to dry. I also chopped some brocoli florets  being sure to leave a flat side on each of them that would get nice and seared. I then strained the rice cakes, and put them on the griddle in the bacon grease with the broccoli. As these were grilling, I put 1/8 c. of soy sauce, 1/8 cup of broth, 1/8 c. of rice vinegar, 1/8. c. of sake, 1/8 c. of sugar and and 1/8 of korean gochujang paste (you can use sriacha instead, but the gochujang is sweeter and you will need to balance with sugar accordingly). Put all this in the same pot you just drained. Bring to a boil until it looks nice and glassy, like hot jelly. Taste. It may need more sugar.

Make sure as you’re making the sauce that the broccoli and the rice cakes are getting evenly turned/cooked. You want them to get nice and crisp on the outside, but still be pillowy inside – so don’t overcook. Once they have a nice sear, remove from the griddle and let sit a second on a paper towel to remove some of the excess fat. Then toss the broccoli, bacon and rice cakes in the sauce. Plate. Top with crispy dried onions.