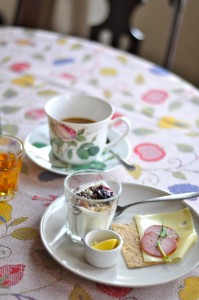 We only got lost once. It was the one time I rejected the advice of our Volvo’s state-of-the-art GPS and drove off the map. Literally. I drove headlong down a one-way road ignoring the sign that we later learned said, “This road ends in steps.”

Fortunately, the all-wheel drive worked as well as the GPS and I was able to back us out, narrowly avoiding an old woman for whom we made a most interesting diversion.

A mere three turns and twenty minutes later we arrived at Villa Sjötorp. Linnea, a cheery blonde in a chef’s toque, opened the door. She escorted us to the main room where she had stoked a fire in the old porcelain stove called a calkalung and we waited while she prepared tea for us.

Villa Sjötorp was built in 1901 by a paper baron to be his summer house. In the 1980s, its life as an inn began after a loose collective of friends gave it almost mythical status as “a place where you could still get away from it all.”  Indeed, once we arrived  at Villa Sjötorp, our pace slowed. We sat on benches covered in cowhides on the veranda taking in the view of the archipelago sprawled out before us, drinking tea and eating homemade cookies that dissolved in our mouths like little clouds

Villa Sjötorp’s rustic elegance carried through to the dinner menu as well. Our starter was a bright plateau of pickled red onions, Muscat geleé, baby greens and a chicken liver paté. “The chickens are from just down the road,” Linnea told us, adding, “and they’re huge!”

We ate by candlelight, at tables decked in white linen, with china dishes and silver. We eyed the two couples across the room. “I wish Steve were here,” said Amy.

The soup course, which Linnea unveiled table-side was a hake pot-au-feu with shellfish, radishes and onions. It tasted like a more rustic version of the soup at Fond the night before. The main course was beef in Burgundy sauce with tomatoes that were lightly smoked and then finished in the oven.

The other dinner guests that evening were locals. So once the staff finished cleaning up the kitchen, Amy and I were left alone at the inn. “Just call if you need anything,” smiled Linnea as she left for the night.

We awoke the next morning to the smell of hot coffee and a massive breakfast buffet. Linnea popped her head out of the kitchen, “God morgon!” The table was filled with delicacies: a jam made from “aronia,” a berry I’d never heard of, organic yoghurt, cereals, pastries, a tray of sandwich meats and cheeses and vegetables, and crispbread. There was hot tea and coffee, several different kinds of juice. Our table from the night before was now set with a Joseph Frank-style tablecloth and fresh roses.

After breakfast Linnea walked us out. We hated to go. “Those cookies,” I asked, “what are they?”

I made sure to stop at a grocery store and get “hjorthornsalt” before leaving Sweden. Hartshorn salt is pulverized baking ammonia (or, ammonium carbonate). It can be substituted with baking powder, but the result may be slightly different.