Where the Fairy-tale Princess Slept 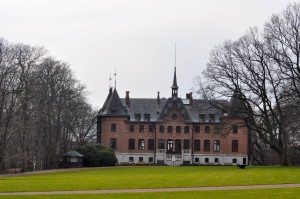 We left Rusthållargården and drove to Sofiero, a former summer house of two Swedish kings located just outside Helsingborg. When Gustaf Adolf died in 1973, he donated the estate to Helsingborg, making it so that today we commoners can picnic on the same grassy lawns and play on the same playgrounds as royals from a bygone era. Today the castle is known mostly for its gardens, voted some of the best in Europe. Everyone said we were about a week early, but that early spring is the best time to see it, when the rhodedendruns are all abloom.  There is also an annual garden festival in August that attracts throngs of visitors. 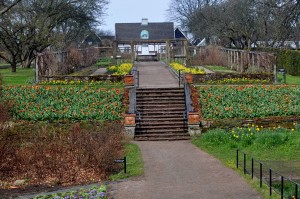 Princess Margareta, who spent much time there during her 15 years in Sweden, and was chiefly responsible for the design of its gardens, wrote that, “Once upon a time there was a castle. It was built in… the south of Sweden, and it had one of the loveliest situations in the world. But when my husband and I had it given to us, there was scarcely anything in the way of flowers, and the whole place gave one the impression of being the enchanted forest where the fairy-tale princess still slept.” 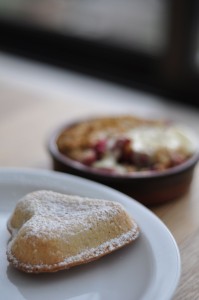 If it had been warmer, I would have taken our rackebajsare from Heberleins, our Karlssons Vodka and our flatbread and had a picnic on the grounds. As it was chilly, we had a traditional lunch of shrimp sandwiches and rhubarb crumble at the café under the glass veranda  on the back of the house. Just as we were clearing our table and putting our tray away, a woman at the table next to us stood up and said something in Swedish to us, gesturing toward Denmark. As we turned to look, the fog over the strait parted to reveal the turrets and towers of a castle in the distance. It was Kronborg in Helsingør, otherwise known as Shakespeare’s fabled Elsinore or, Hamlet’s castle.

Leaving Sofiero, we had a little time to kill and I had always wanted to see Helsingborg. Walking around, we happened upon a restaurant called Brooklyn. The owner, seeing me snap a shot of his marquee, came out and started chatting with us. He told us how, after spending a few years stateside, he was so inspired by Peter Lueger’s that he moved back to his hometown in Sweden and opened his own version of the well-known steakhouse. Though a far cry from Peter Lueger’s, the place had a warm, casual vibe where everyone seemed to want to talk to each other. Had we not been otherwise booked for dinner, we certainly would have stayed to try the steak.

TIPS!
En route to Sofiero from Arild, you pass right through the town of Höganäs. This little town is the birthplace of the well-loved Swedish ceramic company of the same name and the current home to outlets for Höganäs, Ittala and other world-famous Scandinavian brands where you can get seconds for a fraction of the retail cost.