When Spring Comes to Sweden

The sun was setting as we wound our way down the narrow lanes, past old farmhouses and pastures full of shaggy-haired highland cattle to our destination at the tip of Sweden’s Kullen Peninsula. As I pulled my suitcase out of the trunk, the last slant of sunlight swathed the rooftops of Arlid. We quickly checked in, stowed our bags and followed a path down to the sea before it got dark.

A crisp breeze whistled through the fenceposts. A sign at the beach read, “No dogs allowed.” There was no one in sight. Mostly a resort destination, the village of Arild was nearly devoid of inhabitants mid-week, this early in spring. Which of course meant we had the place to ourselves.

If you don’t swoon over the place after a walk down through the town, which is threaded with stone steps and walkways down to the beach, then you will when you set down to dinner at Rusthållargården.

The town’s principle hotel, it has been in the Malmgren family four four generations, dating back to 1904. The oldest parts of the buildings still in use today were built around 1675. We did not know what to expect from dinner, but we could see from the menu that it was pricy. I couldn’t find any mention of it online, due to the fact that we were some of their first guests. The owners had recently overhauled their restaurant, christening it Malmgrenska Matsalen and giving the chef free reign to do something new.

The wait staff at Rusthållargården wore white gloves. Knives seem to magically balance, blade down on the table.  Spiegelna glassware glisten in the candlelight and WMF knives and silverware graced the tables. We tried not to get too excited. 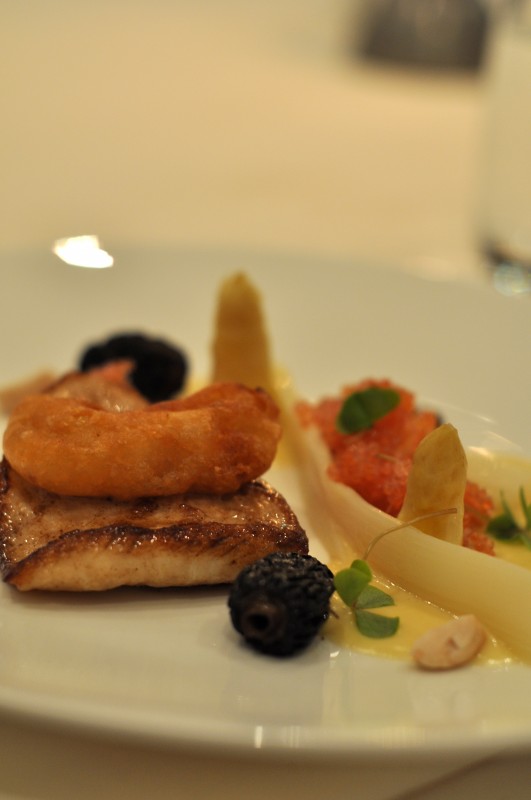 Our server had a hard time translating the menu into English, the chef came out to introduce each dish. He was shy and hesitating, but the menu was sexy, fun, and inspiring. It started off with a popover-like pastry topped with buttermilk foam, accompanied on the plate by a kind of bacon dust, apple chiffonade, mackerel roe and fennel fronds.

The taste of innocence
Our second course was coppa from a local farm (as if we hadn’t eaten enough meat that day!), served fanned out on a plate. He had rubbed thin slices of toast with sundried tomato dust and they came on a silver slatted bread rack along with a silver bowl filled with Spanish olive oil, green beans and buds of wild garlic.

The next course was a mystifying combination of roe, morel mushrooms and thick stalks of white asparagus on top a slab of Turbot, served with a buttercream sauce and breaded, deep-fried marcona almonds. The sauce was light and buttery with a hint of lemon. Eating this dish was like eating a slice of spring from a basket hauled from a nearby forest glade.

Next came baby goat (kid), which I could not recall ever having eaten before. I puzzled about eating it for a minute, when Amy said, “It’s death. Any way you slice it.” So we dug in. It was delicious. Sitting on top a bed of wild greens, radishes and a compote of artichoke and pepper, it was like some sort of wild springtime indulgence to eat things picked and killed before their prime. 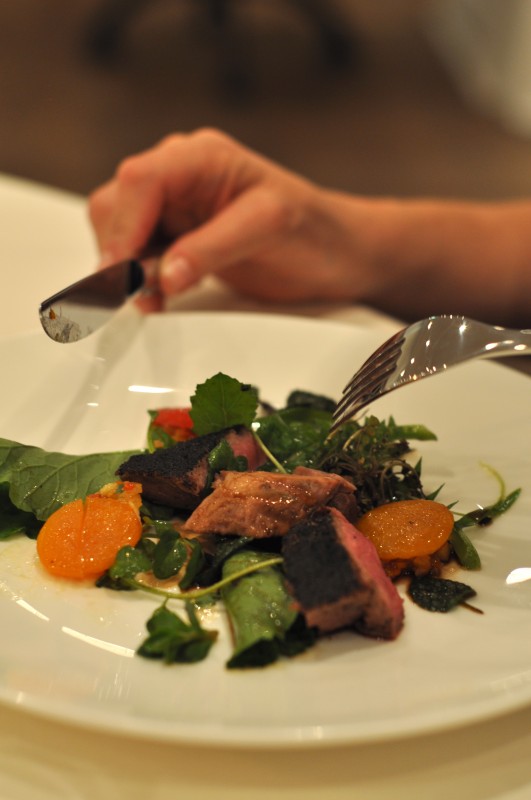 I’m not one for play-by-plays, except when every dish is such a revelation. The cheese course was served with a potato – and sauerkraut(!). It was kinda crazy. It was also so good, that in spite of the fact that I had eaten more that day than I usually ate in a weekend, I finished every last bite. Something about eating a new potato hours after getting schooled about them made this little dish seem like some a divination. And the toasted caraway seeds on top? Pitch perfect.

Good morning, sunshine
I was going to skip breakfast the next morning. I was still full from dinner! But when my Skype connection died with my friend the Nomad back in the states, the woman at the desk came over to me. “You really shouldn’t miss breakfast,” she said. Entering the same dining room that morning, it was um… like night and day. Sunlight streamed through the windows. The room that held the wine decanting station the night before was now a buffet flush with homemade yoghurt, homemade applesauce (with apples from Elsie & Sture in nearby Ingelstrade), and apple juice produced in Larsviken. It was all well worth the calories.

TIPS!
If you have extra time en route to or from Rusthallergarden (we did not), you might want to pay a visit to one of Skane’s most popular fika spots. Flickorna Lundgren in Skäret has been a favorite among the royal family as far back as Gustav VI Adolf. Rumor has it he was known to eat ten vanilla hearts in one sitting.