When people ask me about my trip to Mexico, I mention that I serendipitously happened upon a F.U.N. concert on the beach. They smile and nod. I say that it was a family vacation, that we basically hung out by the pool all day. Then, forgetting that most people don’t do this kind of thing, I tell them how I descended into the belly of the hotel kitchen and made cochinita pibil.

This is when people stop and listen. “You did what?”

Even Chef seemed surprised when I mentioned that I gotten a lesson in how to make this regional dish from the head chef of our hotel. That’s when I realized: most people don’t do that kind of thing.

“Stuff like that always happens to you,” one friend of mine commented. I paused. “But it didn’t happen to me, I made it happen.” “Same thing,” she said.

Some things do just happen to me. When I moved into this apartment, I had no inkling  that I had a rising-star chef (just watch, you’ll see) for a neighbor. But that job I got as a tall ship cook? I applied for it. That move I made to Sweden in my 20s to start an ad agency with friends? I could as easily have stayed home. Much more easily.

When the chef at Santos Luxury Experience invited me to learn how to make cochinita pibil in the kitchen of our hotel, it was because I had been pestering all the maids to see if anyone could teach me to make it at home. I had a romantic image of a Mexican woman of my mother’s generation taking me in and showing me how to do it – a scenario straight out of a Diana Kennedy cookbook.

When the housecleaning guy got his superior on the phone and told me in perfect English that the head chef would teach me, I should not have been disappointed. But I was – I had a vision, and that wasn’t it. 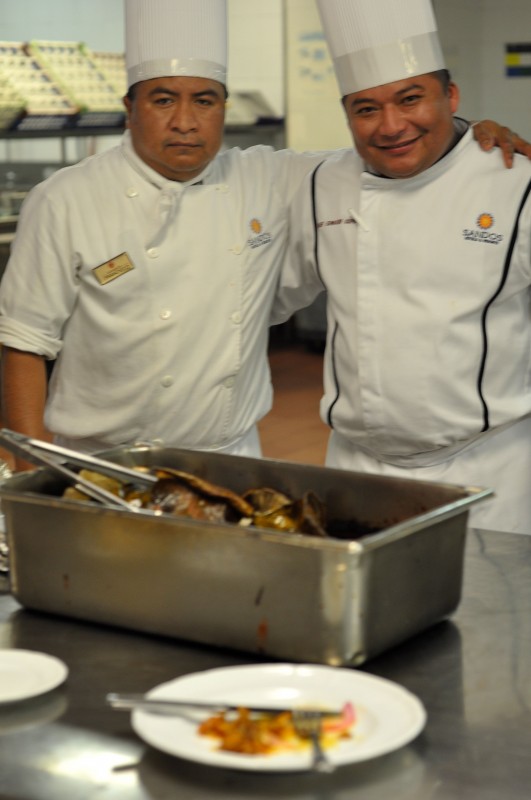 Then I showed up for the lesson. I was guided into the bowels of the hotel by the head of housecleaning, a neatly dressed woman around my age. She gave me an apron and a chef’s coat, a tall paper hat and, best of all, she tied a kerchief around my neck. After my week at the pop-up where we wore jeans and t-shirts, and whatever aprons we had at home, this felt very official.

I love seeing inside kitchens. Any kitchen. I love seeing how different this utilitarian space can be. This one was massive. Long. Huge. As long as one wing of the hotel and as wide. It is windowless, like most kitchens, the preparation of food being a thing that, tradionally, no one wants to see.

It was also spotless. This was reinforced by the fact that the chef, as he introduced me to the cook who routinely made the dish, said, “He is now going to show you how to wash your hands.”

I watched him scrub his hands thoroughly, even cleaning under the nails with a nail brush. I watched, fascinated: they were not messing around.

Travel literature
When I packed for Mexico, I brought three books: Diana Kennedy’s classic Mexican cookbook (with an inscription from my former mother-in-law dated 1998); John McPhee’s treatise on Oranges and Pablo Neruda’s Twenty Love Poems and a Song of Despair.

Sometimes I think it’s probably a good thing that I’m single and live alone. I’m the kind of reader who would drive the average man to drink. I’d interrupt him a billion times to say things like: “A nadie te pareces dede que yo te amo.” And, “When I get home I’m going to make vinegar out of pineapples.” And, “Honey, did you know that pretty much Every Orange Tree is grown on the trunk of a sour lemon?”

Okay, so you get it. I took a Mexican cookbook to Mexico to brief myself on the local cuisine. I took Neruda because he’s puts beautiful sentences together in Spanish. But, you might ask, “Why did you take a book on oranges with you to Mexico?”

When Columbus made his second trip, he left orange seeds in the Caribbean. Shortly after that, expeditions to Mexico introduced them on the continent. I’m not going to serve you a lot of pulp about oranges, though if you lived with me, I would. Right now all you really need to know is that I took that book with me because of cochinita pibil.

I first tried cochinita pibil several years ago at an unassuming Mexican restaurant in the San Fernando Valley called Dos Arbolitos. At the time I was not aware that this was a regional dish, nor that one of the things that makes it so specifically Yucatan is the use of Seville Oranges.

Seville Oranges are not sweet. They are also not orange. These are just two of the reasons why you will be hard-pressed to find them in an American grocery store. As McPhee says in his 1967 treatise, when the [green] oranges were tested on American housewives, the housewives preferred the orange oranges. Though rest assured, there’s probably a green orange underneath the dye and ethylene gas.

At a recent dinner party a friend of mine talked about her father, a farmer, who grew up eating fresh food prepared, as it were, straight from the barnyard. “But when I was growing up,” she said, “there would be no more of that. We ate most of our meals from packages and cans.” At the time, she mused, her father saw this as an upgrade. Almost as a class distinction. The sign of the privelged class was the fact that they did not cook. This was the generation that McPhee was writing about when frozen concentrate was sweeping the nation.

Pulled pork, Mexican-style
Classically, cochinita pibil is made by stuffing a suckling pig with Seville oranges, lathering it with a paste made of garlic and achiote, and wrapping it in banana leaves. The whole kit and caboodle is then plunked down on a bed of hot coals and covered up with earth, or sand, depending on the location, and there it stays for at least three hours. I read somewhere that it is the “pulled pork of Mexico.”

The lesson I received our hotel was not the same as my imagined version – but it was far more practical. After all, I wouldn’t be able to come home and replicate the bed of coals outside my apartment, now would I?

One of the things that always impresses me is the confidence with which a chef will move when making a dish he or she knows well. I could not give you an exact recipe based on what I saw that day. He put some of this, some of that, and blended it all up. What I can give you is the list of ingredients – because that is what kind of notes I took. The rest is for you to figure out, tasting as you go. (Or, more likely, finding another recipe online. 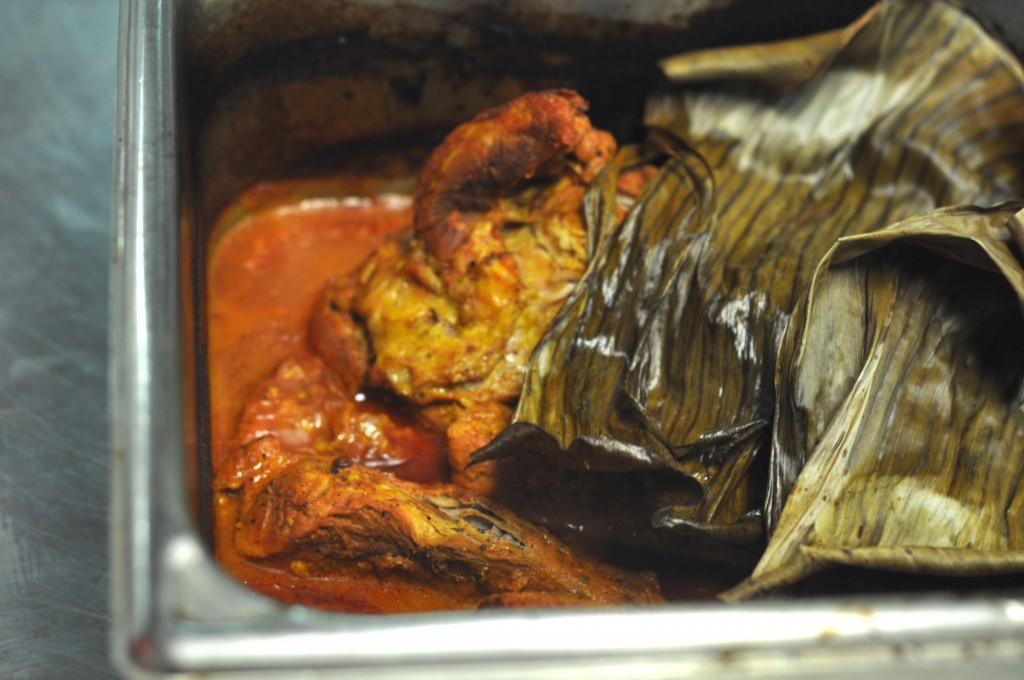