I had such a great meal the other night at Red Medicine. One of those meals that inspires you to eat better, make better food and put more thought into your craft. The ingredients were interesting; some of them foraged or transformed by new techniques (the chef was inspired to ‘shave’ nuts using one of those table-side cheese graters). The plating of the papaya salad was so carefully composed that it felt sinful to disturb with something so mundane as a fork and the pear tart we were served, shaped like a wreath and dotted with sorrel cream, looked and tasted like something out of a fairy tale. However, with the exception of the dark, nutty bread, the banh mi sandwich I ate was not that much better than the one I made this week. 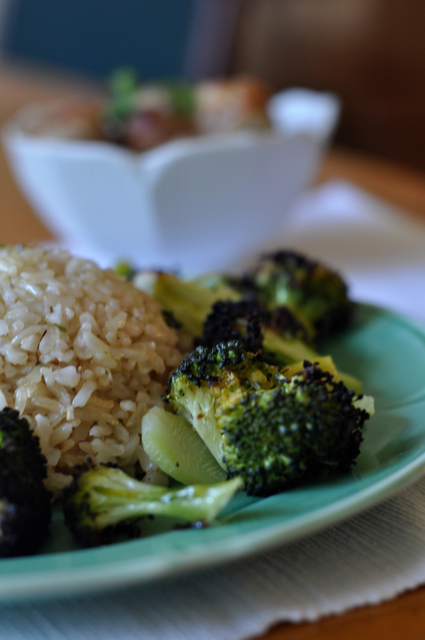 What makes it gourmet?
The question on my mind as I left the restaurant that night was: what makes something ‘gourmet’ anyway? It used to be that the meal I made on Day 1 could kinda qualify. Because I used fresh vegetables and spices. When I made the banh mi yesterday, I thought, this is unusual: this is gourmet! But on second thought, I think it was just… ethnic.

On Saturday, Thomas’s daughter, Malin, came over and played with me in the kitchen. I showed her how to make hot cocoa with baker’s chocolate. We made cumin mayo together and when I asked her if she liked pate and she said yes, I made her little mini banh mi toasts. We watched an episode of Top Chef’s Last Chance Kitchen in which two chefs went head to head making lunchmeat sandwiches. One chef made turkey, pepperjack and avocado; the other made a twist on his favorite, “ham and butter,” which he articulated with fish sauce, cilantro, radicchio, garlic, ginger and apples. I don’t have to tell you who won. You could say it was the pepperjack that did her in, but why? What makes pepperjack inherently non-gourmet? Or is the difference that one chef took his favorite sandwich a step (or two or three) further, while the other just made her favorite sandwich?

Don’t over-think it
A few days ago as I was working on the meals for this blog, I asked Chef, who lives upstairs, to come down and give me some advice on making a Mexican dish that would incorporate chicken liver pate. His advice? Don’t over-think it.

But I have a feeling, if he were playing with the same ingredients, he wouldn’t be over-thinking it per se, but his chef-trained brain would carry it a step further.

Perhaps especially because of my ingredients, I kept thinking about Mollie Katzen’s Enchanted Broccoli Forest – a dish in which she cooks the broccoli like little trees sticking up from a bed of rice. At one point, that was fresh and new… I tried not to over-think it.

Cilantro-Jalapeno Dressing
Remember that jalapeno you pickled yesterday? Take it out. Put half of it in the food processor. You can put it all in, but watch out! Add 1-2 t. of the vinegar you pickled it in as well.
Add a bunch of cilantro sprigs (1/2 – 1 c.) leaving just a few for Friday night’s meal
1-2 T. sugar
2 t. freshly squeezed lemon juice
and 1/4 teaspoon salt

Process. Add more vinegar if it’s not liquid enough. Taste for salt and sugar and add the other half of the jalapeno if you can handle it.

Pork Meatballs
6 oz. pork sausage
1/4 heaping cup breadcrumbs
1 clove garlic, finely minced or pressed
Egg white from one egg (if you saved the white when you used the yolk to make mayo, you’re all set!)
Salt

Mash all ingredients except the salt in bowl. Form into balls. Put in a 9×10 glass baking dish in the oven at 350. Bake 10-15 minutes, turning 1-2 times until lightly browned. Remove from oven.

Assembly
Remember the rice you made on Saturday? Rice doesn’t keep too long. It’s a haven for bacteria. But one way to revive it is to fry it or, in this case, roast it. I had almost exactly a cup left. If you’ve eaten it all, you will need to make a cup of rice and unfortunately, it won’t behave the same until it’s cooled. But you can skip this part and just eat fresh rice.

If you have the leftover rice, move over meatballs, insert rice. Hopefully the meatballs will have left a little pork-flavored residue behind. If you want, you can place the meatballs on top the rice for even more of this intermingling. Toss the broccoli in a bowl with 1-2 t. oil to lightly coat them. Make a space for them either separately or all mixed together in the 9×10. Lightly sprinkle salt over everything. Return to the oven and bake at 350 for another 10-15 minutes, or until broccoli is barely cooked and the meatballs have turned a little browner. Then move the dish to the broiler and finish for roughly 5 minutes, checking on it constantly and turning the meatballs and the broccoli to make sure they brown but don’t burn.

Remove from oven. I filled a bowl with the rice and turned it over as shown for aesthetics. I served the dressing separately because it’s spicy and easier to integrate in small amounts with chopsticks. The broccoli leaves I added upon serving and they wilted in the hot rice.

Was it gourmet? You tell me.