Chef picked knocked on my door around 12:30. We stopped in at the Santa Monica Seafood to get another sturgeon and then headed over to AK’s again. We found him slicing onions and marinating a massive tenderloin for a baby shower he’s catering today. Man, I thought, do these guys ever stop cooking?

I jumped in and helped peel root vegetables and chop Brussels sprouts while Chef portioned the fish. The Caterer came in after a while and brought us shawarma and freshly made falafel that we shoved down our throats so we could arrive at the restaurant in time to set up.

Tonight there were two fewer cooks in the kitchen, which made the roles clearer and helped us iron out the rhythm. We served around 30 guests. We goofed up only a handful of times. But forgetting to take the bacon off the souffle for the diner whose ticket said, “No red meat,” for instance. But when Chef asked me later how we did, I had to admit that we did pretty well. These kinds of glitches are exactly the kind of thing a restaurant irons out in its first weeks.

Table-side manner would be the one thing he would need to train his people on if his chef-to-table concept pans out. Before service, I rehearsed in my brain how I would describe the dishes. I reminded myself to greet the tables, smile and enunciate. These may seem like simple things, and those of you who know me may be surprised but for me, going from the kitchen to the dining room is like shifting between two sides of my personality on cue: from focused and creative to vivacious and entertaining. It’s harder than it might seem and I know I’m not the only one who experiences this.

I worked both the starter and the dessert station for most of the night. Depending on how things go, I may move on over the stove tonight. I’ll admit that it’s a little intimidating. 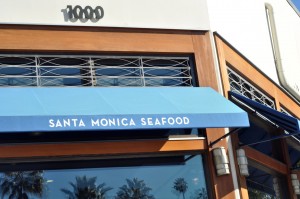 As I write this Chef is, I think, working on improving the dessert. Halfway through our stint and he is taking the time to make it better. I’m pretty sure Chef woke up around 8 and did not go back to sleep. And not only is tomorrow the final day for the pop-up, it’s also the day that Chef goes to head-to-head with a another chef on one of those competition shows. Oh – and did I mention he’s adding a new, option to the menu? A large-format duck dish so a table of four can order a whole duck!

With only two more nights to go, I find myself asking the same questions I did when I worked at Somewhere Restaurant in Manhattan: how do people like Chef sustain this pace? I awoke at 7 this morning dreaming about being in a kitchen, the chef changing the recipe, my hair going gray. I went back to sleep. I managed to get in a run and now it’s time to get ready for another 12-hour day.

I’m not saying it’s bad work; it’s creative and beautiful and when you can hear the dining room full of laughter and happy voices, it’s damn rewarding. I’m also lucky enough to have stumbled into a crew that has a lot of fun doing it. But it is not for the faint of heart. 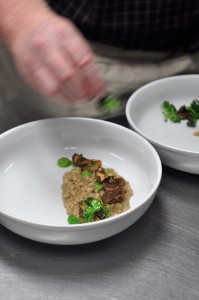